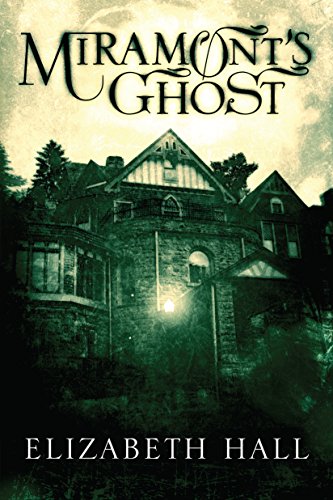 I am a sucker for a good book based on a true story. Writers who can take an incident and spin off an imaginative story from it always impress me. The Book Club Beach Club recently read The Girl Who Came Home, based on a story of fourteen people from a small Irish village who were on the Titanic, and I just finished Elizabeth Hall's Miramont's Ghost, about a reported haunted castle in Manitou Springs, Colorado.

Young Adrienne lives in her grand-pere's castle in countryside of France, with her mother Genevieve. Her father is a diplomat who works in Paris and they rarely see him. Her aunt Marie is a malevolent presence, striking terror in the hearts of the servants, and her family as well.

Adrienne has the gift (or curse) of second sight. She can clearly see visions of things that will happen, but at the age of seven is too young to know not to speak of them in public. Her grandmother had the same gift, and the entire village shunned her. Adrienne's grand-pere fears the same will happen to Adrienne.

Lucie, Adrienne's governess, began writing Adrienne's visions in a journal, and the discovery of this journal has repercussions. Marie convinces Genevieve that it would be in Adrienne's best interests for her to accompany Marie to America to stay with Marie's son Julien, a parish priest who built a big castle for himself in Manitou Springs, Colorado. Marie's evil intentions become clear when she imprisons Adrienne in the castle.

Hall weaves an intriguing story, likened by many to the classic Rebecca, about a family with dangerous secrets, and a young woman who must use her wits and gift of visions to survive. I flew through this book, reading it in one day because I had to find out what happens to Adrienne.

The setting of late 19th century France was fascinating, and Hall's descriptive writing added greatly to the story. She set one scene at the Paris Opera House that was so beautiful, if I closed my eyes, I would swear I was there.

I loved how Hall took this true story of a priest's haunted castle and created this world. Giving Adrienne the gift of visions, the plucky governess, the evil aunt- all of these are combined to create an atmospheric suspenseful novel that is perfect for curling up with a cup of tea on a snowy day by the fire.

I also appreciated her Bibliography at the end, enabling the reader to find out more of the true story of Miramont.

Thanks to TLC Tours for putting me on this tour. The rest of Elizabeth's stops are here: