The News Sorority by Sheila Weller 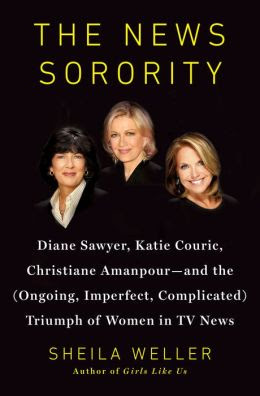 If you have been following the news lately, you have no doubt heard about the suspension of NBC News' Brian Williams. If you are fascinated by this saga, you may wish to pick up a copy of Sheila Weller's book, The News Sorority- Diane Sawyer, Katie Couric, Christiane Amanpour and the (Ongoing, Imperfect, Complicated) Triumph of Women in TV News.

Weller takes us on a tour of the interesting lives of these three successful women. Diane Sawyer was the daughter of a successful judge and a "1950's version of a Tiger Mom" in Kentucky. She idealized her father and his death when she was a young woman devastated her.

Sawyer wanted a job in news, and with her steely reserve and driving ambition, she started at the bottom and worked harder than everyone else to work her way up the ladder from reporter to the press office for President Nixon to morning anchor at the CBS morning show to her latest home at ABC, where she became the face of ABC News, anchoring at various times Primetime, Good Morning America and finally ABC World News Tonight before recently retiring.

Katie Couric was raised in an upper middle class family in Virginia, and she was the youngest of three daughters, all of whom were intelligent and successful. Couric was a cheerleader in high school, and she used everything in her arsenal from her smiling, chipper personality to tenacity and strong work ethic to move up the ladder from reporter at a Miami TV station to a mostly forgettable CNN reporter stint to Pentagon correspondent at NBC News to her breakout at The Today Show, and her short-lived stint as anchor of The CBS Evening News.

Less is known about Christiane Amanpour, who has been at CNN for many years. Her wealthy Iranian family fled their homeland when the Shah of Iran was overthrown and Amanpour was sent to a boarding school in England. Amanpour was star-struck and kept scrapbooks of Hollywood stars. She loved fashion and didn't seem to be the serious minded woman we know her as today.

The book takes us through the well-known aspects of these women's lives- Sawyer working with President Nixon on his memoirs after his resignation, her marriage to Mike Nichols, Couric's famous "ambush" interview with President George H.W. Bush and the terrible loss of her young husband and sister to cancer, Amanpour's war reporting and on-air confrontation of President Clinton over his policy in Bosnia.

Less is known about Amanpour, and perhaps that is why her story seemed more interesting. Her reporting from war zones, as in Bosnia, are harrowing and heart-pounding. Weller spoke with reporters and producers and tech people who accompanied Amanpour and these sections of the book are the most compelling.

Amanpour's zeal to bring an important, horrific story about the genocide in Bosnia drives her to nearly single-handedly bring this story to the attention of the American people and politicians and demand action.

We get a lot of behind-the-scenes information, with the story of the early days of CNN being most intriguing (they had no bathroom in their building and had to use a nearby motel and gas station). The egos involved in the news business (Peter Jennings and Charles Gibson do not fare well here), the jockeying for position, and the politics of it all are enlightening.

The one thing that bothered me was the "unnamed sources" who were willing to say not-so-flattering things about the women without putting their name to it. The highschool gossip-y feel of that detracted from the book for me. I found the things said by people willing to put their name to it more credible.

What shines through is that these successful women all had faced adversity and loss, and were driven to succeed in their field. They felt a calling to bring important information- Saywer's reports on childhood poverty, Couric's drive to inform people about colon cancer, and Amanpour's reports on war and religion- to the American people.

Fans of TV news will appreciate this book most, and I would love to read a book about the early pioneers of women in TV news, women most of us have never heard of who paved the way for today's well known successful women.

Posted by (Diane) bookchickdi at 9:58 AM