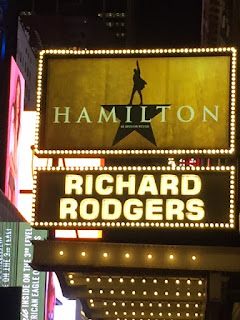 The hottest ticket in entertainment is Broadway's Hamilton. Created by writer/director/composer/actor/genius (yes, he won a McArthur Genius Grant so he is an actual genius) Lin-Manuel Miranda, who won a Tony for Best Musical for his In the Heights, it is the most creative, amazing piece of theater I've ever seen.

Miranda read historian Ron Chernow's biography Hamilton while on vacation and thought that it would make a great hip-hop Broadway musical. Some people may have thought he had sunstroke, but his creative mind set to work and the result is a brilliant show that is sure to sweep this year's Tony awards. and go down in history as a game-changer in theater.

Miranda brings to vivid life the historical people most of us barely know much about at the time of the American Revolution. Alexander Hamilton was an intelligent, ambitious young orphan from the Caribbean island of Nevis when he came to America.

He graduated from King's College in New York and became a lawyer. But he was passionate about the coming revolution and after writing many pamphlets and tracts encouraging revolution, he became General George Washington's right-hand man and eventual first Secretary of the Treasury.

In addition to his many accomplishments, we see Hamilton's personal life. He married Eliza Schuyler, the daughter of a wealthy, prominent man, and he had a close relationship with her sister Angelica.

The story is narrated by his frenemy Aaron Burr, whom we know eventually killed Hamilton in a duel.

The cast is amazing, from Miranda as Hamilton to Leslie Odom Jr. as Burr. (He has a stunning voice.) Angelica is portrayed by a luminescent Renee Elise Goldsberry, who captures the stage whenever she is on it. Phillipa Soo stands out as Hamilton's loyal wife Eliza.

Christopher Jackson plays George Washington as we know him- a large presence and a strong leader who depended on Hamilton and at the same time called him out when Hamilton needed it. Daveed Diggs is fantastic as both LaFayette and has a memorable turn as a Thomas Jefferson who is not as stuffy here as history books make him out to be.

Jonathan Groff should order his tux now for the Tonys as his performance as a petulant King George II brought down the house in each of his four short scenes. He is a shoo-in for Best Supporting Actor and is sure to be up against many of his co-stars.

I'd call Hamilton a hip-hop opera, as it feels like it could be at home at the Met. The subject matter is operatic, and this may well be the future of opera. The show is mostly sung, and the lyrics, using phrases we remember from history class, are ingenious. The performers in this show get quite a vocal workout. (Owning the soundtrack is a must so you can truly appreciate the words. Oh, those words.)

The choreography, costumes and staging perfectly complement this groundbreaking show. Tickets are extremely hard to come by (they are putting a new set of tickets on sale next week for November 2016- January 2017) but I cannot tell you much I loved this show. I loved history class in high school, and Miranda and company bring it to new, exciting, accessible life in Hamilton. If you see only one show on Broadway, this is the one to see.

The website for Hamilton is here.
For more Hamilton fun, check out #Ham4Ham videos posted on YouTube.

Posted by (Diane) bookchickdi at 5:55 PM