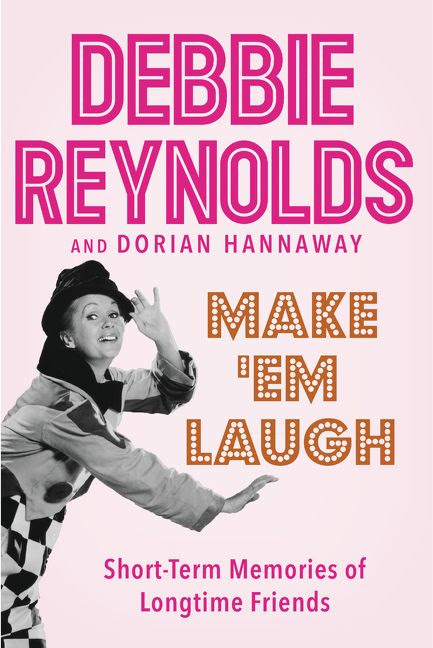 The subtitle of Debbie Reynolds' book Make 'Em Laugh is Short-Term Memories of Longtime Friends and it aptly describes this book; it's filled with short anecdotes about Reynolds and the people she met in her long and storied career.

While reading it, I felt like I was sitting next to her on her couch in her beautiful home while she flipped through a scrapbook, sharing memories of the many famous people she has met and known.

Reynolds is hilarious, as anyone who has seen her on a talk show or award show knows. She has a sharp, quick wit that is well on display here. She also has some funny stories to share about her family, including daughter Carrie Fisher who inherited her mom's sense of humor.

Carrie opens the book recounting the evening that her brother Todd accidentally shot himself in the thigh with a blank from a gun. Debbie called a cab to take him to the hospital because "ambulances can be so loud", and when Debbie was brought to the police station to be fingerprinted, Debbie gave them one finger to be printed. And we're off.

Reynolds shares that she likes to do talk shows, The View and The Talk being two of her favorites. She really loved being on Craig Ferguson's show, saying that no matter what she said, he was right there with her.

She was one of Joey Bishop's first guests on his talk show in the 1960's and recalls demonstrating on Regis Philbin (Joey's sidekick) the proper method taught to Girl Scouts to put out a fire. She jumped on him and he came out of it bruised and scraped, while she split her dress. She was a hit, making the front page cover of New York Sunday News.

Reynolds talks about her visits to the White House, sitting next to Prince at the Oscars, who was wearing a purple lace shawl over his head, dancing the night away with Belgium's bachelor King Baudouin and having her rear end pinched by both Prince Philip (Queen Elizabeth's husband) and Robert Kennedy.

Jonathan Winters and Jimmy Stewart were favorite dinner party seat mates, Milton Berle, whom Reynolds called "obnoxious", was not. Neither was Shelley Winters, "a pain in the ass." She shares a tale of dumping a bucket of ice and water over a drunken Elaine Stritch's head when Stritch was talking through an entire cabaret performance of a friend of Reynolds.

One anecdote she shares is one I was there for. She recounts attending the first preview for Bette Midler's Broadway show about agent Sue Mengers. She was seated near Liza Minelli, and I was sitting across the aisle from them and was so excited to see both of these superstars.

If you are a fan of Debbie Reynolds, Make 'Em Laugh is a book you'll enjoy. It would make a lovely gift for the Turner Classic Movie aficionado in your life.

Posted by (Diane) bookchickdi at 6:12 PM