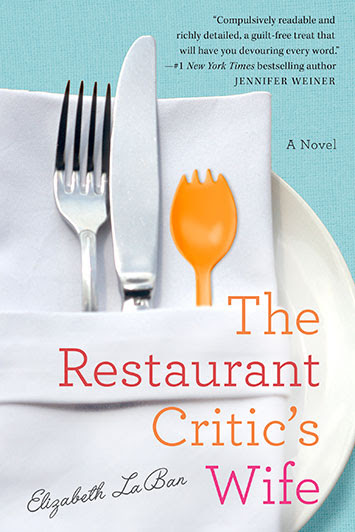 Writers are told to write what they know, and Elizabeth LaBan has taken that to heart in her novel The Restaurant Critic's Wife.  Like her protagonist Lila, LaBan is married to the food critic for a large Philadelphia newspaper. (Luckily, LaBan says that the character of the critic is much crazier than her actual husband.)

Lila is a high-powered executive for a large hotel chain. She specializes in crisis management and public relations, traveling the globe and solving problems with aplomb. After she breaks up with her long-time boyfriend, she finds herself in New Orleans for work when she meets Sam.

Sam and Lila fall deeply in love. Lila becomes pregnant and they decide to marry. They are very happy together, and then Sam gets the opportunity he has been waiting for- a job as a restaurant critic at a Philadelphia newspaper.

By now, Lila and Sam have two young children- Hazel, a toddler, and baby Henry. Sam is totally engrossed in his job, taking it very seriously. He is overly protective of his anonymity, believing that if anyone knew who he was, he could not do his job properly.

This unfortunately extends to Lila and the children. He doesn't want Lila to befriend any neighbors in case they own a restaurant. Lila's high school friend Maureen lives in town and also has two young children, but her husband owns a restaurant, so they cannot be friends.

He also doesn't want Lila to go back to work for the hotel, which Lila desperately wants to do. She felt in charge there, and being stuck at home and not allowed to have friends begins to frustrate her.

The one friend she makes is a waiter from a fancy restaurant, Sebastian. He is kind to Lila, and helpful with the children. But Sam flips out when he discovers their friendship because he feels Sebastian may be using Lila to get information.

It seems to me that Sam is too controlling and not very understanding of what he is asking of his wife. He acts like he works for the CIA, and that his identity must be protected for national security reasons.

The story was really captivating, especially for anyone who is a foodie; the descriptions of restaurants and the food are mouth-watering, and I liked the snippets of Sam's reviews that open the chapters. The characters are interesting and well- developed and I really adored Lila and rooted for her. Even the kids were engaging characters, which is sometimes difficult to do.

LeBan also does a wonderful job writing about marriage and parenthood, and the many compromises that must be made to make it all work. Her description of Lila's C-section and its aftermath were dead-on as well.

I recommend The Restaurant Critic's Wife to anyone who likes a good story about the compromises of marriage, as well as anyone who would like a peek into the world of restaurants.

Thanks to TLC Tours for putting me on Elizabeth LeBan's tour. The rest of the stops are here: