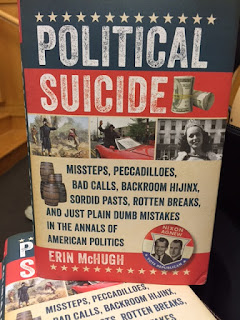 In a political season that no one could have seen coming, Erin McHugh has written the perfect book to accompany all the craziness- Political Suicide- Missteps, Peccadilloes, Bad Calls, Backroom Hijinx, Sordid Pasts, Rotten Breaks, And Just Plain Dumb Mistakes In The Annals Of American Politics.

McHugh spoke at Barnes & Noble 86th St. store in Manhattan a few weeks ago, the day after Ted Cruz dropped out the Presidential race, a week after he chose Carly Fiorina as his imaginary Vice-Presidential running mate. She introduced herself by saying "for those of you who don't know me, from Monday to Tuesday, I was briefly Ted Cruz's Secretary of State", which elicited huge laughs from the crowd.


Although we think this year's circus atmosphere is unusual, McHugh's book belies that fact. She read a few pieces from the book, starting with Robert Potter, a Congressman from North Carolina who castrated not one, but two men- a minister and a young boy, both of whom he believed were having an affair with his wife. In the South, castrating someone is called "potterizing".

She spoke of Marion Zioncheck, a Washington state Congressman who has the distinction of being the only sitting congressperson sent to an asylum. (I'm sure some citizens have other nominations for this category.)

Rita Crundwell committed the largest municipal fraud we never heard of, stealing over $53 million in her position as comptroller and treasurer of Dixon, Illinois, Ronald Reagan's hometown. It took her 30 years, and while she was stealing from the town to fund her horse farm and expensive clothes, furs and jewelry, the town literally fell apart. Roads didn't get paved, police cars went unrepaired. This one shocked me.

Familiar scandals like Senator Bob Packwood and Congressman Wilbur Mills sexual escapades were recounted, and although we have had some more recent scandals, like the Anthony Weiner sexting incident, McHugh's book features incidents that have already completed their story. We'll have to wait for the sequel to hear about those other ones.

In the lively Q&A section of the program, McHugh talked about the huge amount of research she did for this, starting with lists on Google and then researching many hours at the library. When asked what the standards of conduct are today versus history, McHugh replied that today's standards are low.

McHugh bemoaned the fact that people seem to have no manners anymore in the political arena. "They go one more step and one more step and next thing you know, you're talking about your member" in a national debate for President.

The media and the 24-hour news cycle contributes to this course discourse, and with the 2016 Presidential race gearing up, Erin McHugh's Political Suicide is the perfect book to pick up to remind yourself that our nation has survived political craziness before, hopefully we can yet again.

The short chapters make it an easy read, and political junkies will want to add this fun book to their collection. I highly recommend it.

McHugh also has two other timely books- Like My Father Always Said for Father's Day and Like My Teacher Always Said, which makes a great teacher's gift. You can find them here and here.