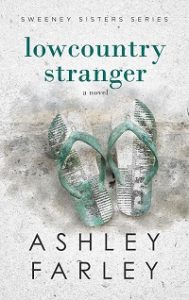 Lowcountry Stranger is Ashley Farley's second novel in her Sweeney Sister series, first introduced in Her Sister's Shoes. I didn't read the first novel, and when I started Lowcountry Stranger I feared that I would be lost. I admit it took me a few pages to get adjusted, but once I did, I was hooked by this intriguing family's story.

As the book opens, Faith is celebrating her marriage to Dr. Mike in her hometown of Prospect, South Carolina. This is Faith's second marriage, her first was to an abusive man who is now in prison. Faith's seven-year-old daughter Bitsy hasn't spoken a word since the incident that put her father away.

Faith's oldest sister Jackie spends her week working as a decorator in Charleston, coming home on the weekend to her twin high school senior sons and her doctor husband. Jackie is feeling restless, wanting to further her career, and troubled by her husband's infidelity last year.

Middle sister Sam is a single mom who raised her college-aged son Jamie on her own. Sam manages the family seafood market, a Prospect mainstay. Sam is dating Eli, a town policeman who loves and wants to marry her, but Sam says that marriage is not for her.

When a bedraggled teenage girl Annie shows up at the wedding, the Sweeney sisters reluctantly take her in after she tells them she was traveling with a family she was working for when they abandoned her and took off.

Bitsy takes a shine to Annie and she speaks her first words to Annie. Faith is so moved by this, she asks Annie to care for Bitsy while she works. But although something seems not quite right with Annie, the Sweeneys open their homes to Annie.

Life has it's ups and downs for the Sweeneys. Faith is very protective of Bitsy, and when they all took Annie in so quickly, I thought maybe it was a little too fast. They really knew nothing about her, and let her care for a traumatized young girl. Eventually we find out Annie's true story, and how it affects the entire Sweeney family.

I got caught up in the Sweeney Sisters story very quickly, and loved the setting of the small town in the Lowcountry. And as someone who once owned a small fast food restaurant, the family seafood market business was fascinating to me.

There a lot of characters to follow in the book, but I was fully invested in each of their stories. I loved the sisters' relationships, and the cousins' strong connections to each other. Sometimes in novels of this genre, the male characters tend to be somewhat one-dimensional, but here the men were full partners in the story and fully fleshed out.

Ashley Farley is giving away a $50 Amazon gift card to celebrate the publication of Low Country Stranger. To enter follow the instructions here:

Ashley Farley has a really fun website with some cool information graphics about the Sweeney sisters, including music playlists for each sister.
Visit her website at†http://www.ashleyfarley.net.

Thanks to TLC Tours for putting me on Ashley Farley's tour. The rest of the stops are here: