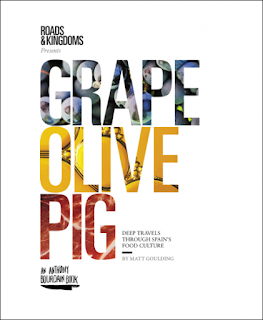 Grape, Olive, Pig- Deep Travels Through Spain's Food Culture begins with Matt Goulding as a high school senior traveling with his class on a trip to Spain in 1998. Goulding fell in love with Spain and on a return trip in 2010, he fell in love with a Catalan woman named Laura, a woman he was destined to marry.

Goulding takes the reader on a journey through Spain through the eyes of someone who has found his calling and his home. In addition to taking us on a culinary tour of Spain, Goulding gives the reader a historical perspective, from the Romans who built Barcelona to the flourishing of Barcelona in the early 14th century to the dark days of fascism under Francisco Franco to the desire of the Catalan province to succeed from Spain that exists today.

We start in Barcelona, home to to the now-defunct El Bulli, considered for years to be the best restaurant in the entire world. Many of world's greatest chefs passed through the kitchens of El Bulli and four of the top six restaurants on the 2015 list of the World 50 Best Restaurants are run by chefs who worked in El Bulli.

Goulding takes us through the streets of Barcelona, stopping in The Boqueria, one of Europe's best, biggest and oldest food marketplaces, where each day people shop for fresh seafood, fresh-baked loaves of bread, cheese and charcuterie.

We go to Salamanca, where we meet Fermin Martin who shares the secret to jamon iberico (Spanish ham)- it's the diet of acorns fed to the pigs that give the jamon its deliciousness. Martin discusses the the problems in dealing with the USDA and all its myriad rules and regulations that are keeping us in the US from enjoying this delight.

We learn how to make the perfect paella in Valencia, and how the sushi craze in Japan has caused an explosion in bluefin tuna fishing in Cadiz. We travel with world famous chef Jose Andres to the cheese caves in Asturias.

The most interesting people we meet are a trio of sisters, the Gonzalez sisters. They are percebeiras, "hunters and gatherers of the gooseneck barnacle of the Spanish Atlantic". Gathering barnacles is a difficult and dangerous job, and the fact that they are women has created conflict with the men who do the same job. Their story is fascinating.

Grape, Olive, Pig is an essential book for foodies, armchair travelers and anyone who is planning a trip to Spain. Goulding's love for his chosen home is evident in this fascinating book, filled with great stories, lots of fun facts and lists and mouth-watering photos of food and drink one must try when visiting Spain. After finishing Grape, Olive, Pig, you will be checking online flights to Spain. I highly recommend it.

Thanks to TLC Tours for putting me on Matt Goulding's tour. The rest of his stops are here: