Al Franken- Giant of the Senate by Al Franken 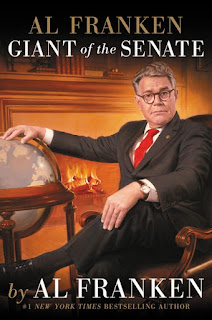 Many people, myself included, were surprised when Al Franken, whom I knew from his long tenure as a writer/performer on Saturday Night Live, won a Senate seat in Minnesota. I have been following his Senate career and find him to be an intelligent, serious person, doing a good job.

Franken recounts his path to the Senate, and his time there thus far, in Al Franken, Giant of the Senate. He brings the reader up to date on his life, starting with his family who moved from New Jersey to Minnesota when Al was just four.

His Dad was a liberal Republican, (which Franken points out no longer exists), his Mom a Democrat. The Franken family were middle-class, at a time when that meant you believed you could do anything you wanted.

Franken went to Harvard, where he met his wife Franni at a freshman dance the first week of school. Franni's family had it harder than Al's family, as her father died when she was a baby, leaving her young mother to raise five children on her own. They all went to college thanks to Social Security, Pell Grants, the GI Bill, and Title I, and Franken wants every family in this country to be able to have the opportunity that his wife's family did to move into the middle class. And that is why he says he is a Democrat.

We learn a little bit about Franken's comedic partnership with Tom Davis, and their tenure on Saturday Night Live, but it is his road to the Senate that is more interesting, if you can believe it.

He was angered when Norm Coleman, who won Paul Wellstone's Senate seat after Wellstone was tragically killed in a plane crash, made a rude statement about Coleman being "a 99 percent improvement over Paul Wellstone."

Wellstone was a beloved, compassionate man who worked his entire career to make things better for his constituents, and Franken respected him greatly. After that statement, Franken decided to run for Senate against Coleman.

We get a fascinating look at what a Senate campaign entails, as well as a look at what Minnesota is like as a state. They have a significant Native American population, they are home to the well-respected Mayo Clinic, and they are skeptical of show business people.

We learn what a 'bean feed' is (think spaghetti dinner or fish fry), and that Franni makes a mean apple pie. Coleman went after Franken's comedy roots, twisting sketches he wrote on SNL to imply that Franken is perverse- he jokes about bestiality for goodness sake!

Franken's 4th grade teacher made a commercial for him that had a big impact, but it was Franni's commerical where she talked about how Al helped her get through a bad period when she had a drinking problem that turned the tide.

The election was so close that there was a recount- that lasted eight months before Franken was able to take his seat. Franken talks frankly about his Senate experiences with Chuck Schumer, Mitch McConnell, Jeff Sessions, and a hilarious chapter on Ted Cruz, whom no one likes.

We get an inside look at how a bill really gets to be a law (it's not as easy as Schoolhouse Rock makes it out to be), Senate hearings on Sonia Sotomayor, and the work to get the Affordable Health Care Act passed.

Franken has kind words for the Clintons, both of whom helped to get him elected in 2008, and while he respects Barack Obama as a great President, he and the DSCC did not help him much at all. He was re-elected in 2014, and speaks with great disappointment and concern that Trump was elected, and what that means for America.

After reading Al Franken, Giant of the Senate, I have even more respect for Franken. He works hard for the people of Minnesota, on issues that effect their everyday lives. He studies and does his homework, and I admit to tearing up as I read his last chapter about attending a high school graduation where a young Muslim woman, who was a Senate page for his office, spoke. He believes in the greatness of the American people, something that we are seeing play out right now in Texas as volunteers flock to help those devastated by Hurricane Harvey.

I give Al Franken, Giant of the Senate my highest recommendation. It gives you hope that there are good people in government on both sides, and hope for our country's future. It's also laugh-out-loud funny at times. (#Franken2020, anyone?).

Posted by (Diane) bookchickdi at 6:03 PM