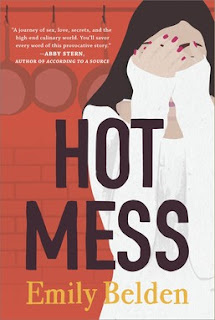 As someone who ran two fast food restaurants with my husband, I could not resist the opportunity to be on the TLC Book Tour for Emily Belden's debut novel Hot Mess.

Allie Simon loves her job as a social media manager for a cotton  company. After hours she works at pop-up dinner events with her boyfriend Benji Zane, the bad boy hotshot chef of Chicago. Benji is three months sober after a serious drug problem and has moved into Allie's apartment.

He is a rock star as a chef, but other than creating the occasional pop-up dinners, he hangs out on Allie's couch watching the expensive cable channel package and playing around on the internet. But he does make Allie amazing lunches to take to work everyday.

Allie is charge of the money (which doesn't go much farther than barely covering their bills) and doles it out to Benji $20 at a time; that is all he can handle. The sex is hot and if Allie is honest with herself, she likes the attention she gets as the girlfriend of a guy everybody wants to know.

When Benji is approached by Angela, a woman who was at his last pop-up dinner, with a proposal to open his own restaurant on the hottest culinary avenue in Chicago, he is all-in. While a hedge fund manager is fronting most of the money for the restaurant, he requires that Benji come up with $30,000 of his own cash to invest and guess where Benji goes to for that.

Allie reluctantly cashes out her life savings to invest in Benji's restaurant, Here, and then finds out that Benji has relapsed. They have a terrible fight and he disappears six weeks before Here is to open.

Unable to get her investment money back, Allie and Angela team up, find a new chef in Tabitha, and work their butts off to make Here a success.

My favorite part of Hot Mess was watching Allie, Angela and Tabitha work together to open Here. I found the details of construction, hiring the staff, and placing the food orders fascinating. As they readied for opening night, I got jitters just as they did, hoping that all went well, and holding my breath as the first customers came in to dine.

I also felt heartache for Allie as she discovers that Benji is the not the guy she thought he was. Addicts are cunning and manipulative, and Benji personifies that perfectly.

I did find the idea that Allie was a media sensation by virtue of the fact that she is dating a culinary rock star a little hard to fathom, but I guess in this age of Kardashian, where people are famous for being famous or dating someone famous (like on the Bachelor, Allie and her girlfriends' favorite show) it is plausible.

I am older than the demographic that Hot Mess is aimed at, but I really enjoyed it. There are a lot of food references in here that will make you drool, and I liked that the women in this story became their own heroes through their strong work ethic. I highly recommend Hot Mess for anyone who likes Jennifer Weiner's novels and foodie fiction.

Thanks to TLC Tours for putting me on Emily Belden's tour. The rest of her stops are here: