In Praise of Difficult Women by Karen Karbo 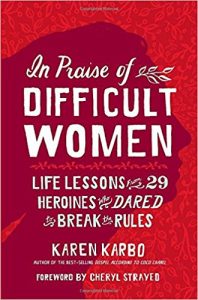 In the introduction to Karen Karbo's In Praise of Difficult Women: Life Lessons from 29 Heroines Who Dared to Break the Rules, the author states that "a difficult woman is a woman who insists on inhabiting the full range of her humanity." This book profiles 29 women in modern history who do just that.

Each chapter profiles one woman, beginning with a single word to describe them ("Fiesty" for Harry Potter author J.K. Rowling, "Indefatigable" for Justice Ruth Bader Ginsburg, "Determined" for Jane Goodall) and a vibrant illustration by Kimberly Glyder.

Karbo writes a short sketch of each remarkable woman, and her opinion of what it is that makes each of them "difficult". I am familiar with all of the names in the book, but I got an deeper understanding of women whom I didn't know much about, like "imperious" French fashion designer Coco Chanel, who gets a longer chapter (perhaps because Karbo's previous book was The Gospel According to Coco Chanel).

People responded to her book about Chanel by saying it seemed that Chanel didn't seem like she was a nice person. Karbo would often say that Chanel was a "complicated, stubborn, ambitious visionary who transformed the way we dress, view ourselves in clothes and walk through the world. You need her to be nice on top of everything else?" People don't usually comment on ambitious men's "niceness".

"Fanatical" Eva Peron gets a longer chapter too, and for those who only know her from the Broadway musical "Evita" will appreciate maybe the most complicated woman in this book. Peron came from extreme poverty (as did Josephine Baker), and as the mistress, then wife, of Argentinian President Juan Peron,  she spent much of her time giving food, money and more to the poor in her country. She and her husband also refused to listen to any dissent, punishing those who disagreed with them, shutting down newspapers, unions, and impeaching Supreme Court justices.

I also found chapters on Josephine Baker, Frida Kahlo, Amelia Earhart, and Janis Joplin fascinating. Angela Merkel's story- a research scientist who lived under Communism in East Germany to rise up and become a unified Germany's Chancellor and now the leader of the free world- gives smart girls everywhere hope.

Many of us know Kay Thompson from the Eloise children's books, but her contributions to musical comedy world are innumerable. She was a choreographer, lyricist, vocal coach (Frank Sinatra owes her much), and it was her idea to have singers sing and dance at the same time on stage, instead of just standing at a microphone singing. The word diva was made for Thompson.

Perhaps the most moving anecdote that Karbo shares is a personal one. She was in First Lady Hillary Clinton's West Wing office in 2000, and she was speaking with an engaging young aide.  When Karbo asked her what was the best part of working for the First Lady was, the young lady's face "opened into a grin." She makes me feel smart!"  That doesn't make Clinton difficult, but it speaks volumes as to who she is.

In Praise of Difficult Women is a great read for Women's History Month. You can dip into it and read a few chapters while riding the bus, waiting at the doctor's office or in your car at school pickup. You're sure to find more than one who will inspire you to be a difficult woman. And if you want further reading about these remarkable women, Karbo shares her sources at the end, with further reading on her website here.

Thanks to TLC Book Tours for putting me on Karen Karbo's tour. The rest of her stops are here: