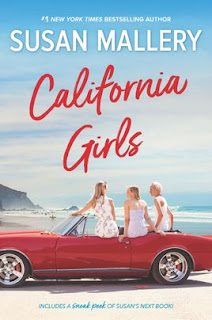 To say that the three Schmitt sisters are having a bad week in Susan Mallery's California Girls is an understatement. Finola, the hardworking host of a Los Angeles morning show has just been told by her husband that he is having an affair- right before she is to interview the much younger woman, a Taylor Swift-like popular singer, live on air.

Sister Zennie is single and her latest date, a nice guy named Clark, has just broken up with her. She isn't that upset about it, she's happy being on her own, but she dreads telling her mother who will try to set her up with both men and women.

Ali, the youngest, has just been informed by her fiance's brother that the wedding is off the day after the invitations have gone out. Her fiance wasn't going to tell her, he was just going to leave her at the altar until his brother stepped in.

Top that off with their disapproving mother's insistence that the sisters must come help her clean out the home they grew up in because she is moving, and you've got a lot of stress for these ladies.

Finnola thought that she had a solid marriage, so her husband's declaration has thrown her for a loop. They were preparing to go to Hawaii on vacation where she was planning to tell him that she was ready to start a family. Now she is dodging paparazzi and trying to hold it all together without her producers, fans, or heaven help her, her mother, finding out.

Zennie's best friend , who survived ovarian cancer, comes to her with a huge favor to ask- would Zennie be their egg donor and surrogate mother for the baby she and her husband want to have? Zennie agrees, much to the consternation of her other friends and Finola, who think this is a very bad idea. And don't tell her mother who spends much of her time lamenting that her daughters have yet to make her a grandmother.

Ali has to undo all the wedding plans, try to get deposits back, and find a new apartment since she was planning on moving in with her husband. His brother Daniel gallantly offers to help Ali with all of this, even though Ali always thought he never particularly liked her.

The relationships between the sisters is very believeable and the characters are well-written. They have shifting alliances, and we get information about their upbringing that informs their relationships today. They are all at a crossroads in their lives and have to lean on others even though that may not be easy for them.

They have to balance their careers and relationships, something that many readers will be able to relate to. Will Finola lose her job and her husband? Can Zennie really give up a baby she carries for nine months, and will her friendship survive her now-overbearing friend, and how will this affect her career as a surgical nurse? Will Ali finally speak up for herself and go for the job and man she wants?

Mallery prides herself on always have a satisfying ending, so all of these storylines get wrapped up, if not in the obvious way, they all get an ending that will make readers happy. California Girls is a perfect beach read book, which is where I read it.  If you're looking for a quick, easy read to take you out of  this dreary weather, California Girls is it.

Thanks to TLC Tours for putting me on Susan Mallery's tour. The rest of her stops are here: