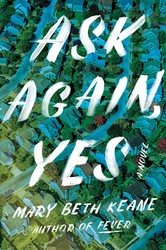 I read Mary Beth Keane's first novel The Walking People about the Irish immigrants in New York City who spent their days digging the subway tunnels. Her second novel, Fever, recounted the story of the Irish immigrant who became known as Typhoid Mary and was quarantined on an island off of New York City, and it is an astonishing piece of literature.

So I was excited to hear that she has written a third novel, Ask Again, Yes, which is also about Irish immigrants. Two young Irish cops, Francis Gleeson and Brian Stanhope, join the police force at the same time in 1970s New York City. They also end up moving next door to each other in a commuter town in upstate New York and start their families.

Francis and his wife Lena have three daughters, the youngest one Kate the same age as Brian and his wife Anne's son Peter. Lena attempts to befriend Anne, but Anne keeps to herself and Lena has her hands full with her three girls. Francis prefers to keep his distance from his former partner Brian, but the reader doesn't know why.

Soon it becomes clear that Anne has mental health issues, and Brian seems ill-equipped to handle them. Peter and Kate become closer, but Peter hides his mother's outbursts from Kate. A terrible tragedy devastates both families, and Peter moves away.

Peter's life becomes very different, and he falls out of touch with Kate, but she is never off his mind. We see what happens as they grow into adults, and come to terms with their feelings for each other.

Keane's novels fill the reader with all kinds of emotions, and never more so than in Ask Again, Yes. You feel like these characters are so real, so full of humanity, and you care deeply for them. My favorite character is Peter's uncle George, who does his best to help his nephew navigate a new life, even though he himself is young and not a parent. I just fell in love with George. ( I got to meet Mary Beth Keane recently at the Book Expo and I told her how much I adored George and she said she loved him too.)

The characters face problems that befall many- mental health issues, alcoholism, serious illness- and they draw strength from their family relationships. They are not perfect, they stumble and fall, and one main character just had me so full of anger. Keane's writing is just exquisite.

I can't say enough good about Ask Again, Yes except to tell you that you must read this book. It is perhaps the best book I have read this year, and one of my coworkers and I spent a long time gushing over it recently.  You know a book is great when you spend time thinking about the various characters and wondering where they are now. Mary Beth Keane can't write books fast enough for me.

Mary Beth Keane will be at Buffalo Street Books in Ithaca today June 13th speaking about her book.

My review of Fever is here.