Time After Time by Lisa Grunwald 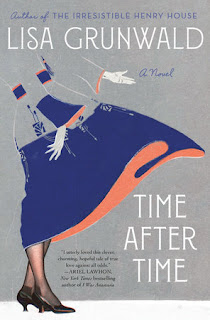 People often ask me where I get my book recommendations. Frequently I get them from my bookish friends, other bloggers, and authors. So when two people whose taste I respect (including author Adriana Trigiani) told me I have to read Lisa Grunwald's Time After Time, I listen.

I'm not normally a fan of time travel/magical books, but this one sucked me right in. In 1925, a young woman named Nora was killed, along with many other people, in a horrific train crash at Grand Central Terminal in New York City.

In 1937, Joe, a railroad leverman man who works at Grand Central, finds Nora standing near the gold clock at the terminal, looking lost and out of place. He asks if he can help her, and there is a spark between them. She says she has to go home to Turtle Bay Gardens, and Joe goes back to work.

Exactly one year later, Joe sees Nora again at the terminal. He takes her to lunch at a coffee shop in the terminal and they get to know each other. Joe offers to walk her home, and after a young man accosts them and Joe scares him off, he turns to find that Nora has disappeared.

When Joe goes to the address that Nora gave him, a man living there says that Nora doesn't live there- she died thirteen years ago in the train crash. Joe is astonished and can't believe the story, but something about Nora is different and maybe this could explain it.

Joe can't get Nora out of his mind. He discovers that Nora shows up on the anniversary of the day of her death, which happens to be Manhattanhenge, a phenomenon when the sun lines up with the East/West streets so that you can see it from the East River to the Hudson River.

Every year on that day, he looks for Nora at the exact place he orginally found her. Now they need to find out what makes her disappear. While they figure that out, they fall in love as they explore all of Grand Central Terminal together.

Lucky for them, Grand Central Terminal has everything they need- food, clothing stores, and Nora even takes art lessons there. They try to have as normal a life as possible, even staying at the Biltmore Hotel there.

I can't recommend Time After Time highly enough. It is a love story to get lost in, and it feels like it is destined to be a classic, a book that you can return to again and again to reread.  Joe and Nora touched my heart deeply. Time After Time is the love story of the summer. Do yourself a favor and read this book.