The Great Unexpected by Dan Mooney 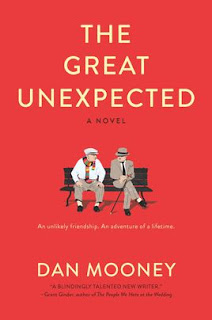 Dan Mooney's poignant novel The Great Unexpected opens with Joel Monroe talking to his comatose roommate Mr. Miller in their shared room at the Hilltop Nursing Home. His previous roommate was his beloved wife Lucey, and Joel has been desperately unhappy since her passing a year ago.

The nurses at the home are kind, including Liam and Angelica, and his fellow residents, especially Una, a dear friend of Lucey's, do their best to try and bring him out of his depression. His daughter Eva, and grandchildren Lily and Chris come to visit, but he feels little connection to them.

When Mr. Miller passes away, Joel dreads getting a new roommate. He is further upset when the new roommate is Frank de Selby, a vivacious former actor, whose attitude about life couldn't be further apart from Joel's.

When Joel tells Frank about his plan to commit suicide, Frank informs him that it must be a grand gesture, something that everyone will remember. Frank offers to put his playwriting skills to use coming up with the perfect plan.

In the meantime, Frank and Joel plot to escape from Hilltop to go into town and have a pint at the pub. Joel is not allowed to leave Hilltop as his daughter fears he will have another small stroke, as he had done before. Their continued escapes causes great turmoil at Hilltop, leading to trouble for Joel.

Frank and Joel become good friends, sharing stories about how their fathers beat them, Frank's acting career and struggles to reveal his homosexuality in a time when it wasn't accepted by society, and Joel's regrets about not being the kind of father to Eva that he could have been.

Watching their friendship blossom was such a joy. Frank encourages Joel to open up and they become quite the pair. Frank is the only friend Joel has ever had, and since Frank's family disowned him, Joel is his best friend. They do have their moments of disagreement, and Joel can say mean things to Frank and others, including his daughter, that are shocking. There aren't many books that feature male friendships, and that makes The Great Unexpected a rare treat in the genre.

The Great Unexpected is such a lovely story, poignant and heartwarming. The characters, particularly Joel and Frank, are so well-drawn, and Una as their secret accomplice is touching. There are a few laughs and plenty of tears to go around, and this book brings to the forefront the radical idea that older people want to have autonomy over their daily life, just as we all do, no matter where they live.

I highly recommend The Great Unexpected, and I can truly say that I found it unexpectedly wonderful.

Thanks to TLC Tours for putting me on Dan Mooney's tour. The rest of his stops are here:

Posted by (Diane) bookchickdi at 4:00 PM