Welcome to this week's edition of the Friday 5ive, five things that caught my attention this week. This post is a catch-up of sorts, with two things that I did a few weeks ago and didn't have a chance to tell you all about.

1) On June 29th I went to see Hugh Jackman at Madison Square Garden in his "Hugh Jackman- The Man. The Music. The Show" tour. I saw Jackman when he did his one man Back on Broadway show a few years back. This show had a few elements from that one, he sang songs from his Tony-winning performance as Peter Allen, he told stories about his life. The big difference here was that he included songs from the movies The Greatest Showman and Les Miserables. He had Keala Settle come on and blow the roof off Madison Square Garden with her rendition of "This Is Me" from The Greatest Showman. The Harlem Village Academy school choir joined him for a few songs too, including "You Will Be Found" from Dear Even Hansen. I most enjoyed his medley of classic movie songs, including "Luck Be a Lady", "Singin' in the Rain" , "I Got Rythym", "Stepping Out With My Baby" and "Sing Sing Sing". He really knows how to rock a tuexdo and top hat too. Jackman is a versatile entertainer who just wants people to have a good time, and we all did. Catch his tour if you can, you'll leave with a big smile on your face. 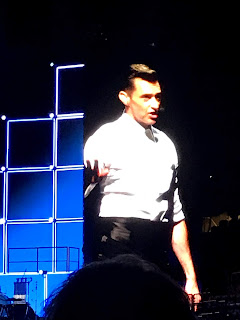 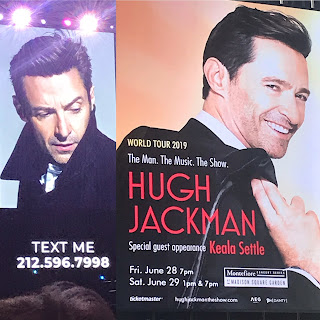 2) I also went to see The Cher Show on Broadway, starring Stephanie J. Block as Star Cher in her Tony-award winning performance. You would swear you were seeing the actual Cher up there, Block is that good. I've seen her in 9 to 5 on Broadway (in the Jane Fonda role), in Falsettos and in The Mystery of Edwin Drood, and she is a fantastic actress. I'm so happy she won the Tony. The show features three actresses in the role of Cher- "Babe", young Cher played by just-out-of-high school Micaela Diamond, (who is terrific and we'll be seeing her on Broadway for a long time) "Lady", (Cher of the Sonny and Cher Show years) played by Teal Wicks, and Block as "Star". Jarrod Spector brilliantly plays Sonny Bono, and he sounds exactly like him when he sings. The three actresses interact with each other as Cher, which some people found confusing, but I thought it worked well. The biggest problem is that it's too difficult to tell Cher's 50-years-in-the-spotlight story in two hours and fifteen minutes on stage. Netflix or HBO should do a miniseries on her life. Go see The Cher Show before it closes August 18th. 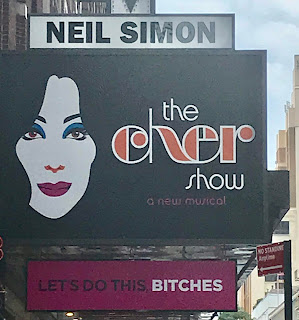 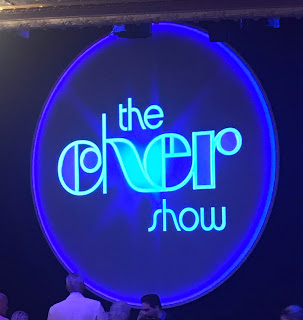 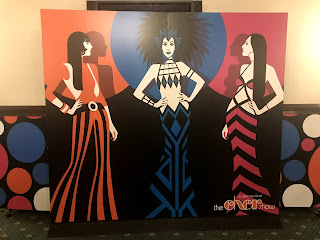 3) We went to our annual NY Yankees game this week with my brother, who was visiting. It was the perfect night for a game, a warm, sunny evening. The first place Yanks were playing second place Tampa Bay, and the first batter of the game, Travis D'Arnaud hit a home run to right field. He went on to hit two more home runs, including the game winning three-run homer in the 9th inning to beat the Yankees 5-4. At least we had good seats and my soft pretzel was tasty. 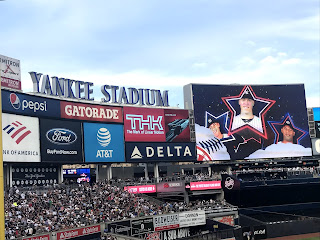 4) My husband and I have been totally absorbed by The Good Fight on CBS on Sunday night. We watched The Good Wife when it was on, and we are loving The Good Fight. Christine Baranksi was always the best part of The Good Wife, so I'm happy to see her in the starring role. Cush Jumbo and Sarah Steele are also back from the first series, and their expanded roles here give them room to shine. I don't know why CBS relegated The Good Fight to their CBS All Access streaming network, it's better than any drama they currently have on their broadcast network.

5) I'm reading two nonfiction books now- Say Nothing- The True Story of Murder and Memory in Northern Ireland by Patrick Radden Keefe and Three Women by Lisa Taddeo. Say Nothing tells the story of a widowed mother of ten children who is taken away from her home in Belfast by masked men and never seen again. Through her story, we find out about "the Troubles" in Northern Ireland, as the I.R.A., a militia of mostly Catholic men and women, battle the British soldiers who are there to maintain the status quo for the ruling Protestant minority by any means possible, including brutal violence against the citizens of Northern Ireland. It is essential reading for anyone who wants to know more about that time in recent history.

Three Women has been a very buzzed-about book for many months. Author Lisa Taddeo talks about the sexual desires of women through the stories of three women. The first is a young woman who had a sexual relationship with her teacher while in high school, and when she reports it a few years later is met with scorn from her community. The second woman is a successful restaurant owner whose husband likes to watch her having sex with other men. Rumors fly in her community about her as well. The third woman is a thirty-something housewife whose husband refuses to kiss her or have sex with her. She reconnects with a high school love and has an affair. This is riveting nonfiction that reads like fiction.

I hope you have a great weekend and that you stay cool in this heat.

Posted by (Diane) bookchickdi at 1:44 PM