July Books From the Book Expo

Each month I will share with you the books that I got at the Book Expo that publish this month. The July books are particularly interesting. 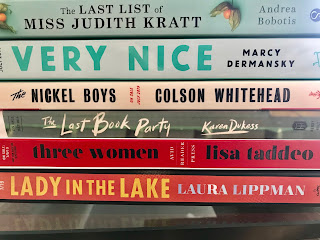 The Last List of Miss Judith Kratt is a debut novel by Andrea Bobotis. Set in the small town of Bound, South Carolina, Judith discovers that she has inherited everything from her family- "the pie safe, the copper clock, the murder no one talked about." From Sourcebooks Landmark, it sounds like a book to read on the front porch with a cold glass of lemonade.

I read Marcy Dermansky's novel Bad Marie and thought that she was a remarkable writer. In Very Nice Rachel kisses her writing professor and when he needs a place to stay, she invites him home to her large Connecticut where he begins an affair with Rachel's divorced mom. Dermansky excels at writing complicated characters and this "brilliantly funny novel of money, sex, and bad behavior" should continue in that vein. Published by Knopf.

No one is getting more press than Colson Whitehead for his novel The Nickel Boys. Set in 1960's Florida, young Elwood is sentenced to a reform school, Nickel Academy, for an innocent mistake. The academy is supposed to provide "physical, intellectual and moral training" to help the boys grow into fine men. In reality it is a place of horrors where the boys, particularly the black boys, are beaten and sexually abused. Whitehead's last novel, The Underground Railroad, was a powerful novel about slavery in the South, and this one looks to be just as gut-wrenching. It's from Doubleday.

Karen Dukess has a perfect summer book, The Last Book Party, set in Cape Cod and the publishing world of 1980s New York (when times were good and the money flowed). It's a coming-of-age story about a young woman who wants to be a part of the literary scene, until she sees what it's really like. Henry Holt publishes.

I read Lisa Taddeo's nonfiction Three Women, where she writes about the sexual desires of three distinct women- Maggie (who had a sexual relationship with her high school teacher and when she reveals it, she is the one who suffers), Lina (an Indiana thirty-something housewife who has an affair with her high school boyfriend after a disappointing sexual relationship with her husband) and Sloane (a forty-something successful restaurateur who has sex with other men while her husband watches). There's a lot to be sad about here, as the women are not in great relationships, and it is very sexually graphic and brutally honest. Avid Reader Press publishes.

Laura Lippman follows up her fantastic novel last year, Sunburn, with the even better Lady in the Lake. It's set in 1960s Baltimore where middle-aged housewife Maddie leaves her husband and son, has an affair with a black police officer, and becomes a newspaper reporter trying to solve the murder of a young black woman. The characters are wonderfully drawn, and I loved the newsroom setting. It's published by William Morrow.

See you in August!

Posted by (Diane) bookchickdi at 4:44 PM