The Funny Thing About Norman Foreman by Julietta Henderson 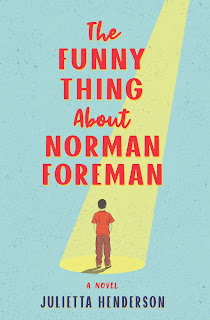 Sometimes you want to read a book that reaffirms your faith in human kindness; Julietta Henderson's novel The Funny Thing About Norman Foreman is that book.
Told from the alternating perspectives of 12 year-old Norman and his exhausted single mom Sadie, we meet them in their home in the small town of Penzance in Cornwall, England. Norman is a kind young man who suffers badly from psoriasis, causing him severe pain.
His only friend is Jax, a bad boy who gets into trouble at school, but is true-blue to his pal Norman. They watch endless hours of comedy on TV, and have worked up their own comedy routine, with Jax as the funny one and Norman as the straight man. They have a Five Year Plan to end up at the world-famous Edinburgh Fringe Festival in Scotland. They call themselves "the Rolls Royce of friends".
When Jax dies of an asthma attack, Norman and Sadie are both devastated. Norman decides that to honor his friend, he will go to Edinburgh and perform alone. The only problem is that Norman is the straight man, not the funny one.
Sadie has a connection to the Fringe Festival. Thirteen years ago that is the place where she had a series of one night stands with four men, resulting in the birth of Norman nine months later. Along with the help of Leonard, retired IT expert and part-time janitor at Sadie's job, they track down the four men and plan a road trip to Edinburgh.
Leonard has arranged for stops along the way for Norman to work out his comedy routine at open mic nights, while Sadie contacts the four possible fathers. Hijinx ensue.
The writing is crisp, with plenty of humor and a little sadness. Sadie has some really funny one-liners, and it seems that everytime they need a skill- setting up a spreadsheet, Photoshopping- Leonard had taken a helpful adult education class at the community center. (He can also ice a wedding cake, weld, and cook a proper Spanish paella.)
When Norman and Sadie needs some kindness, there are people there to help: Big Al, the 6'2 beer-swilling Keats-loving poet who gives Norman pointers on his performance, Tom (a possible father) and his girlfriend Kathy who attend Norman's disasterous talent show where two Frank Sinatra inpersonators end up fighting onstage, and a young Goth woman Sadie meets on a bus who helps Sadie find a missing Leonard.
The spirit of young Jax hangs over all of this lovely story, a mashup of Ricky Gervais' Nextflix show After Life, the Broadway show/movie Mamma Mia, and a buddy road trip movie. (Now you know you can't resist.)
If you're looking for a delightful story that will renew your faith in the goodness of humans (couldn't we all use that right now), pick up The Funny Thing About Norman Foreman. I'm still smiling thinking about Norman, Sadie & company. It's a love letter to single moms and their sons, and this would make a fantastic movie, I certainly hope someone options it right away.
Thanks to Harlequin Books for putting me on Julietta Henderson's tour.