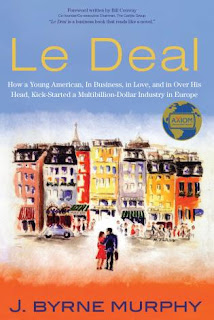 Business books aren't my usual cup of tea, but J. Byrne Murphy's Le Deal story of how his company brought the concept of high-end retail outlet shopping centers to Europe in the 1990s piqued my interest.
Murphy and his partners in McArthur Glen had some success opening retail shopping centers in the US, and saw their next move in taking the concept to Europe. The Savings & Loan financial crisis created havoc for many companies, including theirs, but Murphy and his partners believed this concept was a winner. They just had to find financial backing.
They believed their best move would be to start in England. The British were not keen on fashion outlet stores, afraid that they would hurt the big fashion shops in London. Why would people pay full price for clothes if they could get them cheaper in outlet shops? No, the big fashion houses would never go for that.
McArthur Glen explained that these outlet shops would be selling end of season clothes, directly owned and supplied by the big retail names themselves. Nonsense was the reply, the British do not want to shop at discount stores for fashion.
After convincing them of the concept, Murphy and his team discovered that they had competition in the form of a man they had come across before. Roger Morgan was a smart businessman, and they had had a good relationship- until now. It seemed that Morgan was always one step ahead of them, was he spying on them? Morgan "gazumped" them, a new term for me. In England, a real estate deal is not necessarily complete when the agreement is made. If another company offers more money even up to the moment before the closing, your deal can be "gazumped". That seems unfair.
Murphy moved with his wife to Paris, and he began to set the wheels in motion to open outlet centers in France. The steps that he had to take- from meeting with every politician in every small town they were looking at to site visits to winning approval to appeals to their win to eventually having their case before the French Supreme Court- are recounted in detail here.
The numerous political considerations in France were something Murphy and his team did not have to deal with in the United States. Every politician had an angle, and allegiances changed frequently. The disasterous EuroDisney experience hurt their credibility with the French as well. US businesses were not exactly welcomed with open arms.
I found the section where they were preparing for their grand opening in France most fascinating. As someone who worked in marketing in a mall, I could relate to all the preparations and excitement.  McArthur Glen had to deal with possible protests from downtown merchants blocking the road and construction that was still going in inside the stores right up until the evening before the grand opening.
Le Deal is a business book that reads like a novel. From the differences in business culture in Europe to the criteria for site selection to the machinations of the politicians, it was all so interesting, and at times it feels like a thriller- will they get it done? You have to read it to find out how, and I recommend you do.

Thanks to TLC Tours for putting me on J. Byrne Murphy's tour. The rest of his stops are here:

Monday, April 19th: Diary of a Stay at Home Mom

Friday, May 14th: What Is That Book About