Where I Left Her by Amber Garza 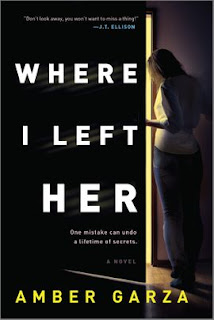 The opening of Amber Garza's novel, Where I Left Her, will leave any parent's stomach in knots. Whitney drops her 16 year-old daughter Amelia off at her new friend Lauren's house for a sleepover. The next morning she texts Amelia asking what time to pick her up and Amelia does not answer.
After hours of no contact with Amelia, Whitney checks Amelia's social media accounts and there is no activity, which is strange. Whitney then goes to what she believes is Lauren's house, and an older woman answers the door and tells her there is no Lauren or Amelia there, just her and her husband.
Now Whitney starts to panic. She calls Becca, Amelia's best friend who hasn't been around much lately. Becca tries to text Amelia to no avail. Becca reluctantly tells Whitney that Amelia has been seeing an older man but she doesn't know more than that.
Whitney contacts her ex-husband who is in Amsterdam when she learns that Amelia was planning on getting a passport to come visit him and his new young wife. She also discovers Amelia took all her money out the bank.
Now the police have been called, and Whitney is in true panic mode as any parent would be. When Whitney was a teenager, she got into some trouble with her best friend Millie, getting involved with some older boys. Could Amelia be following in her footsteps?
As Whitney delves deeper into her daughter's life, and more time goes by with no word from Amelia, she becomes more and more frightened.
Garza does a terrific job putting us into the head of a panicked parent. Any parent who has survived the teenager years will relate to trying to get information out them. Becca is less than forthcoming, trying to protect her friend. That so rang true.
The twist at the end of the book, while hinted at, took me by surprise. It is one that you will gasp at, and maybe even throw the book against the wall  (in a good way) when it comes.
If twisty psychological thrillers that keep your heat pounding all the way through are your idea of a good read, definitely pick up Where I Left Her.
Thanks to Harlequin for putting me on their Summer 2021 Mystery/Thriller Tour.