There Will Be Lobster by Sara Arnell 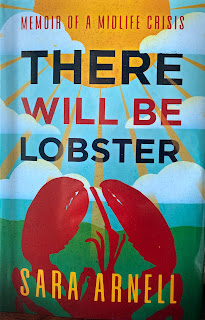 Sara Arnell's titled her memoir of a midlife crisis There Will Be Lobster after an incident on New Year's Day in 2015 when she awoke on the bathroom floor covered in her own vomit after an evening of drinking way too much.
She had a black eye, cuts on her face, and her cheek burned from passing out on the radiant-heated tiles in the bathroom. She had to pull herself together to cook brunch for her adult children and some of their friends. As she entered the living room, a lobster that was supposed to be sitting in a pot ready to be boiled crawled out from under the couch.
Sara was having a bad day after a bad few years. She shares stories about the 18 pound tumor her daughter had surgically removed, (a tumor that no one knew the young woman had), her paralyzing fear of being an empty nester, and losing her job as the CEO of a once prominent advertising agency when the agency lost nearly all of its clients. She was losing her identity.
When she lost her job, Sara spent her days in bed watching Bravo TV's Housewives reality shows, not showering for days, wearing her son's sweatpants. She drank way too much, including one infamous Thanksgiving at her son's apartment with his friends where she impressed (mortified?) the young men with her ability to play drinking games with them.
Sara felt "old, ugly and useless", like it was the end of the world. She couldn't shake herself out of this funk. She didn't have friends she could call to get a cup of coffee, calling herself "an accidental socializer", incapable of making plans with anyone, only speaking to people she ran into accidentally.
I discovered that Sara grew up in the small town of Saugerties, where my husband's family is from, and that added an extra layer of interest for me. There Will Be Lobster is a quick read, with most chapters just a few pages and only 164 pages in total, but Sara packs a punch in this slim memoir. The main point to her story is that if she can pull herself out of a really bad time, maybe you can too.

Thanks to TLC Tours for putting me on Sara Arnell's tour. The rest of her stops are here:

Thursday, August 12th: Diary of a Stay at Home Mom