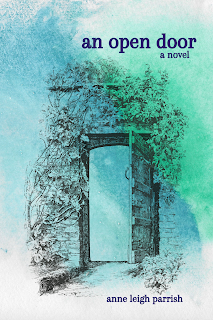 An author whose work I never miss is Anne Leigh Parrish. Her previous novels (Our Love Will Light the World,

The Amendment and A Winter Night) dealt with families living in the Finger Lakes region in contemporary settings.

Her latest novel, An Open Door, is an historical novel set in the aftermath of WWII. When we meet Edith she is a young woman working at the United Nations in New York City, and married to Walt who is studying to be a lawyer and living in Boston.

Edith enjoys her freedom working in New York and living with her husband's widowed aunt. Many people question why a married woman would choose to live and work in a different city than her husband, including her husband who pressures Edith to return to Boston.

After having watched her mother being stifled by her marriage to Edith’s overbearing father, she did not want to live a similar life. When she returns to Boston, Edith intends to continues her PhD studies in literature, but women at that time were discouraged from such a higher level of education. She saw that “the problem was what the world expected women to be, which was always less than a man.”

Unhappy in her marriage and with her life in general, Edith “wished that knowing where you didn’t belong meant knowing where you did.” When an opportunity to buy the neighborhood bookstore (along with two other people comes along), she sees this as a chance to do something more meaningful and fulfilling with her life. Edith’s life begins to revolve around the bookstore, and as someone who works in a bookstore, I so enjoyed reading about the joys, and the trials and tribulations of owning a bookstore.

No one writes characters better than Anne Leigh Parrish, and Edith is no exception. Parrish takes the reader into the heart and head of her characters so brilliantly that we relate and understand them, even when they do things with which we disagree. Edith is not perfect, and she does things that people will find objectionable.

Parrish writes so beautifully, I found myself returning time and again to her words, like this quote from her mother- “One thing I’ve learned is that kind people love kindly; careless people love carelessly; cruel people love cruelly.” She always gives her readers something deep to ponder.  I give An Open Door my highest recommendation.

Thanks to TLC for putting me on Anne Leigh Parrish's tour. The rest of her stops are here: