Son of a Gun by Justin St. Germain 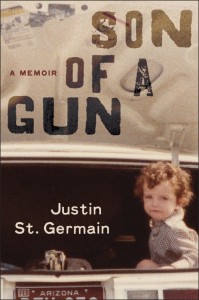 Having just finished reading Cheryl Strayed's Wild, Justin St. Germain's Son of a Gun is an interesting followup. Both authors lost their mothers when they were in their twenties, and searching for what the loss means for the children left behind form the basis for both excellent memoirs.

Son of a Gun opens with Justin returning home to the house he shares with his brother Josh only to be told that their mother Debbie was dead; she had been shot by someone. The young men begin the process of calling their grandparents and long-estranged father. When Justin told his father he writes,


"I told him she was dead and a long pause ensued, one in a litany of silences between my father and me, stretching across the years since he left and the distance between us, thousands of miles, most of America."

From there we learn that Justin and Josh were raised by their mother, a strong, tough woman, a former paratrooper in the military whose career was ended by an injury in a jump. The irony of Debbie was that her weakness was men.

She chose the wrong man to love, time and time again. She dated many, lived with some, became engaged to more than a few, and married five of them. Some of the men were good, but most treated her badly. She was beaten by some, and lied to by many of them.

Debbie went from job to job as well. For awhile, she ran a tourist gift shop in Tombstone, Arizona. She had a failed restaurant there as well. Eventually, she married Ray, a cop, whom Justin didn't really like, but had hoped would take good care of his mother as he turned eighteen and left home for college.

Ray and Debbie moved away from Tombstone, out in the middle of nowhere, where they lived in a beat-up trailer, hoping to build their own home. This isolation wasn't good for Debbie, and she didn't see her sons often. They were living their own lives and therefore didn't see everything going on with Debbie and Ray.

Justin described his mother this way:


"But she also loved to play the martyr. Whenever I got in trouble at school, I'd hear it: I gave my whole life for you and this is how you repay me? In one breath she'd say we didn't owe her anything, and in the next she'd list everything she'd suffered so we could have a better life. Most of the marks on her ledger were true, but she tried to pin her failed relationships on us; once or twice she even tried to claim that we were the reason she stayed through the abuse, as if we were the ones who wanted whatever sort of family we had with those men. There had to be someone to blame, and it was never her."

In the end though, people did blame Debbie for her own death. People who knew her and the sheriff investigating the murder felt that Debbie paid the ultimate price for making several wrong choices, especially when it came to men. It was almost as if they said, "well, what do you expect?"

The writing here is beautiful, at times poetic and always unsparingly honest. Justin takes us on his journey to discover how his mother's life had fallen so off-track. He links the independence of the culture of people who lived in Tombstone, where Wyatt Earp became famous for the Gunfight at the O.K. Corral, and their love of guns with his mother's murder. Would this have happened if she lived somewhere else?

I found the chapter where he attends a gun show intriguing, as well as the fact that he and his brother could not collect their mother's life insurance until the murder was solved. I had never heard that before. What if it was never solved; does that mean the insurance company keeps the money? That didn't seem fair at all.

In the end, Justin determines that everyday he has to choose what kind of man he wants to be. He can choose to give into the depression and grief or he could get his life together. He can do nothing with his life, drifting, working low-paying dead-end jobs, drinking every night to numb the pain or he can move forward. I'm glad he chose the path he did; his story can give hope to those who feel lost.

Thanks to TLC Tours for inviting me to be part of Justin's tour. The rest of the tour is here:

Posted by (Diane) bookchickdi at 3:00 AM