Harlan Coben kept me up for hours last night 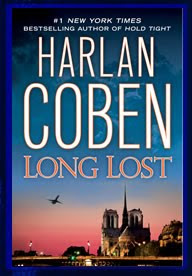 I should know better than to start a Harlan Coben book ten minutes before the World Series game between the New York Yankees and the Philadelphia Phillies. Thinking I could start Long Lost and then put the book down while I watched the game was foolish.

Once Coben gets his hooks into you, you're stuck. His tightly crafted story keeps you turning the pages until you finish the book and realize that not only has three hours flown by, but so has the baseball game.

But during those three hours, the reader is captivated. Long Lost is the newest entry in Coben's Myron Bolitar series, but if you haven't read any of his other Myron books, you will still be able to enjoy the story without being lost.

Bolitar is a sports/entertainment agent in New York City. He receives a phone call from a woman he had a torrid affair with ten years ago, asking him to join her in Paris. Although memories might make any man run for the first available flight, Myron is involved with a single mom who lost her husband in 9/11.

Myron and his loyal best friend/multimillionaire Win (think Bruce Wayne/Batman) are forced into a fight with a bully of a middle school basketball coach (anyone who has ever been involved in youth athletics will recognize the type). The coach humiliated Myron's girlfriend's son in front of a gym full of people, and when Myron calls him out on it, violence follows.

Myron's girlfriend tells him that she is moving to Arizona, and when word comes down that the coach and his buddies are cops and Myron and Win could be in serious legal trouble for the beating they gave them, Myron decides that a trip to Paris is a good idea.

Nothing is ever easy in Myron's life, so naturally his trip to Paris is fraught with danger. Terese, his long lost love, has brought him to Paris to help her find her ex-husband, whom she believes is in trouble.

Terese's ex-husband is murdered, and she becomes a suspect. While Myron tries to help her clear her name, he runs afoul of Paris law enforcement, and somehow Homeland Security, Israeli Mossad, and Interpol become involved. Add in some weird kind of cult, genetic disease, and the possibility that Terese's daughter whom she believed she killed in a car crash years ago may still be alive, and you've got yourself a barn burner of a story.

The great thing about Coben's books is that you never know where he is taking you. You can try to figure out where it is all going, but he always manages to surprise the reader in the end. You find yourself literally holding your breath as you read, and when you get to the end, you can finally let it out. Sometimes I'm surprised that I don't pass out from lack of oxygen before I finish reading.

His characters are well drawn, and Myron is one of the classic good guys in comtemporary fiction. His relationship with his parents is touching, and he and Win make one of the best buddy teams around.

One section of the book particularly interested me- Myron makes a visit to a doctor at the Terence Cardinal Cooke Health Center in New York, and I was so excited when I read that because my husband has a connection to the center. It was such a cool shout-out!

I give Long Lost my highest recommendation. If you are looking a thriller with terrific characters, a fun sense of humor (his one-liners are hysterical)and one that will keep you turning the pages, pick this one up. Then get busy with the rest of the Myron Bolitar novels.