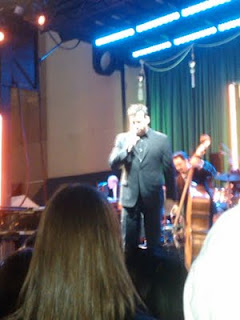 Bloomingdales hosted Harry Connick Jr. as they revealed their holiday windows for 2009. The set up was, let's say interesting, as they had people standing on 3rd Ave., with traffic zooming by. I don't think the rush hour drivers appreciated two lanes of traffic being closed off.

People waited in the street and across the street on the sidewalk. The manager of the Bloomingdales store introduced three contemporary ballet dancers who performed a dance to U2's "Vertigo". I don't attend the ballet much, but the dance didn't do much for me.

Then the manager came back to introduce Harry Connick Jr., who wasn't there yet. The first rule of emceeing an event- make sure the performer is ready to take the stage before you introduce him.

Finally, out came Harry Connick Jr., who joked about his dressing room in the personal shopper's area and the fact that Bloomingdales won't give him a discount. I really enjoy his snarky sense of humor- he's as funny as he is a good singer.

Connick opened up with a jazzy version of The Carpenter's "Close to You", which is fantastic. He segued into the Beatles' "And I Love Her", which I remember singing at my cousin Bonnie's wedding. (FYI- Connick sings it better than me). He also performed "Mona Lisa", Elton John's "Your Song" and my favorite "The Way You Look Tonight", all accompanied by a 15 piece orchestra. The songs are from his new CD, "Your Songs", which has lots of great songs, including my wedding song "Can't Help Falling In Love With You". This is a terrific wedding song CD.

The first 50 people who bought his new CD got to meet Connick and get it autographed, and I was lucky number 24. He's a very handsome man, and he was nice enough to pose for a photo with a mom and her young daughter who were in line ahead of me. "Your Songs" would make a wonderful Christmas gift for someone you love, and if you know of a bride and groom heading for the altar, it would be perfect.
Posted by (Diane) bookchickdi at 3:26 PM