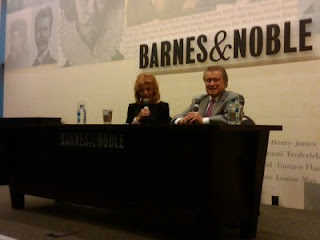 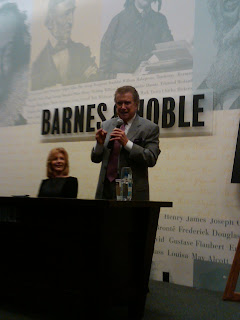 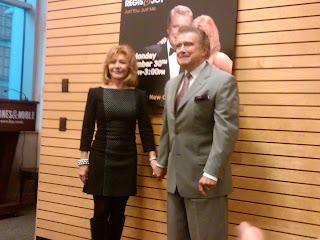 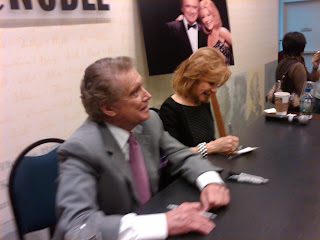 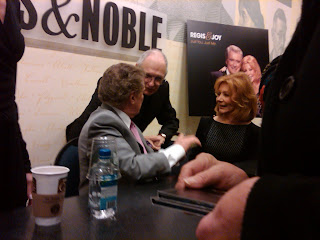 Is there anyone who doesn't know who Regis Philbin is? He and his lovely wife Joy, who looks fabulous, have recorded a CD of duets titled Just You. Just Me..

They held a CD signing at Barnes and Noble Lincoln Triangle in NYC on November 30, the day before Regis goes into the hospital to have hip replacement surgery. The crowd was told that Regis and Joy would not be speaking, just signing the CD and leaving. But the moment Regis and Joy arrived, it was clear that they would spend time with their fans.

They were so gracious, and Regis poked fun at the sparse crowd (maybe 75 people showed up), but he gave those people a great show. He talked about how the CD came about. He harkened all the way back to his childhood and his love of Bing Crosby. He listened to Bing on the radio, and wanted to become Bing when he grew up.

He told of graduating from Notre Dame and how he decided to tell his parents that he wanted to become a singer, after they put him through college. He brought them into a room on graduation day at Notre Dame and sang "Pennies from Heaven". He said that his Italian mother had tears running down her face, and his Irish father was making a fist in anger. A classic Regis story told in his inimitable style!

Then he moved on to his career meeting Joey Bishop, working as the announcer on his show and getting to sing "Pennies from Heaven" to Bing Crosby when he appeared on Joey's show. His love and admiration for Bing is genuine.

Joy told how she played piano as a girl and loved singers like Sarah Vaughn and Edye Gorme. Regis also pointed out his neighbors and good friends Alan and Arlene Alda who showed up to support Regis and Joy. I got to meet Alan and told him how much I enjoyed his books and how my son loved his portrayal of Arnie Vinick on "The West Wing". I forgot to tell him he wrote, directed and starred in one of all-time favorite movies "The Four Seasons"!

Regis and Joy were so kind to everyone as they signed CDs and even personalized them. I told them that they are such good examples of married life and Regis gave me one of his patented looks- it was priceless! I wished him well on his surgery tomorrow and was on my way.

Meeting Regis was one of the high points of NYC life. He was just as he is on TV, so funny and genuine, and I felt like I was watching him doing host chat as he talked about how he came to record his CD. Enjoy the pictures!
Posted by (Diane) bookchickdi at 3:18 PM