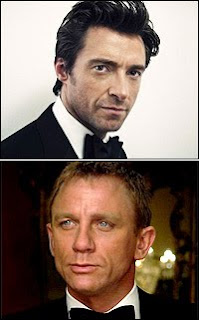 Sometimes big stars in Broadway shows don't translate into success. That is not the case with Hugh Jackman and Daniel Craig in A Steady Rain, a two character play by Chicago playwright Keith Huff.

Jackman and Craig play two Chicago cops, best friends forever. Craig's Joey is a single, alcoholic, lonely guy. Jackman's Denny is married with kids, the kind of guy who always seems to be taking care of everyone around him.

The characters tell their story about an incident the author based on a true story of two Chicago cops who unknowingly returned a young Vietnamese boy they found on the streets to serial killer Jeffrey Dahlmer, who claimed to be related to the boy. Dahlmer later killed the boy.

The actors are both quite good in their roles, and both characters are not what they appear to be in the beginning. Their friendship and partnership change during the course of the play, which is a tight 90 minute show. The audience slowly learns the truth about these two men, as events spiral out of their control.

This is more an actor's play than a writer's play, set up to showcase two fine performers, who more than give the audience their money's worth. Their Chicago accents are perfect, and I was there at a matinee during preview performances when a cell phone rang during the show and Craig, in character, told the person to go ahead and answer the phone, we'd wait. This happened at more than one show, and someone actually videoed Jackman yelling at someone and it ended up on YouTube. It's a clever way to deal with this problem which I have seen repeatedly at Broadway shows. Even more annoying are the people who leave the phones on vibrate- WE CAN STILL HEAR IT- TURN IT OFF!

Now that I have that off my chest, go see A Steady Rain for the strong performances by two of Hollywood's hunkiest leading men. They are not difficult to stare at for an hour and a half.
Posted by (Diane) bookchickdi at 4:33 PM