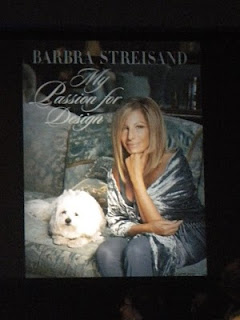 I know that my roundup of BEA (Book Expo of America) is late, but I hope you will think it worth the wait.

I could not attend many of the early week panels, but I did snag a coveted ticket to the keynote talk with Barbra Streisand interviewed by O Magazine's Gayle King.

It was a coup for BEA to get such a huge name like Streisand, who was promoting her upcoming book My Passion for Design: A Private Tour, which will publish in November. She had a slideshow of a few photos from the book, many of which were taken by Ms. Streisand.

The photos were breathtaking. She has a millhouse, with a huge water mill in front. She brought photos of her Red Barn, which is huge (and gorgeous) as well.

Gayle King seemed very nervous, starting the interview by stating that she had planned on wearing an orange dress until she heard that Streisand hates orange. Streisand told King to NEVER wear orange- or certain shades of yellow. King said that she even had her assistant take out the orange post-it notes that King had placed in her copy of the book she was using as reference on stage. And she changed her orange toenail polish.

I think that King was trying to be funny, but it came off as a little desperate to not incur the wrath of Streisand. (It put me in mind of a literary reference- The Emperor Has No Clothes.) King seemed to fear saying or doing the wrong thing. As the interview progressed, she calmed down.

Streisand has the rap of being a perfectionist, and she did nothing to dissuade the audience from that perception. She spoke of her difficulty in finding architects on the west coast who understood her wish for an east coast-style home in California. She went through several different contractors, including one who tore up a hillside to put in a boulder stairs. Streisand did not want the hillside torn down, and insisted that it was unnecessary in order to create the stairs, no matter what the contractor believed was sound engineering. He was fired.

She stated the importance of the outside garden flowers complimenting the color scheme inside the house. It is an affront to her that someone would have flower colors in their garden that clashed with the inside decor. I said to the woman sitting next to me that I would not want to be Streisand's husband. Her reply: "I wouldn't want to be her daughter-in-law." Funny but true.

She opened up a bit about her childhood and her parents. She clearly idolized her father, who died when she was a toddler, and is less kind about her mother. I get the feeling that if her father had lived, he may have disappointed her as well. Her early years were marked by poverty, and she said that the lack of a couch in her mother's apartment led to her homes today being filled with couches.

Streisand's need for perfection means that this book will be fabulous. It will make a great Christmas gift for people who love design.
Posted by (Diane) bookchickdi at 10:13 AM