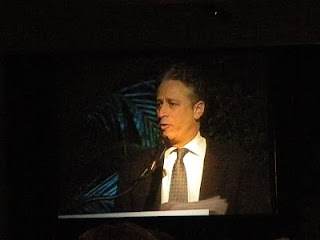 The Adult Author Breakfast held on Thursday of the BEA featured the Daily Show's Jon Stewart as MC, and former Secretary of State Condoleezza Rice, and authors John Grisham and Mary Roach on the panel.

As we waited in line, Stewart walked by with a wave and loud greeting for so early in the morning. His opening remarks were hilarious, as expected. He thanked the audience for their "tepid response" and poked fun at the "muffin basket" that people paid a lot of money for at the breakfast tables. He also joked about the Javits Center being in one of New York's finest neighborhoods, and that he tapes his show nearby.

He commented on Garrison Keillor's controversial remarks that print books were dead in that day's New York Times. Stewart said that he thought that was funny because he thought that Keillor himself was dead, and that comments like that from someone who tapes a TV show for radio are ironic. He also said when he read the remarks, he thought "Great- I won't have to show up (at BEA) today."

Stewart and his cohorts at The Daily Show have a new book coming out in September titled Earth the Book: A Visitor's Guide to the Human Race. He said that it is "the summation of the totality of the human experience- in 224 pages." It is similar in style to their previous best-selling book America.

Stewart then said that he would read from the science chapter. He opens the book, reads silently to himself and giggles. Then he told us that "the Boat Show moves in at 2pm so, get the hell out".

He introduced former Secretary of State Condoleezza Rice, whom his show has frequently lambasted, by saying that "I'm not familiar with her work, but I hear good things- Dr. Rice".

Dr. Rice opened humorously by saying that she "now can read the morning papers and I don't have to do anything about it". Her upcoming book is Extraordinary, Ordinary People: A Memoir of Family, which is about her grandparents and parents, and how they instilled in her the belief that education has transformative power.

When her parents tried to vote in Alabama, they were subject to a poll test. Her mother was asked who the first President of the United States was. She answered and voted. Her father was told he had to guess the exact number of beans in a huge jar. He didn't get his question right and couldn't vote. He heard that the county clerk was Republican and trying to register Republican voters in the Democratic South, so he registered Republican. "And that was how we became Republicans" said Rice.

Rice's parents told her that "she could become President even if she can't have a burger at the Woolworth's counter." She found a photo of her standing in front of the White House when she was eight years old. Her parents told her that she said at the time "I may be out here today, but I will work in there (pointing to the White House) someday." She laughed as she told this story, because she did not remember saying that.

Growing up in the Jim Crow South during the 1950s and 1960s, her parents and grandparents instilled in her the belief that if she got an education, she could do anything, and she did. She spoke eloquently from the heart about her family, and if her spoken words translate as well to the written page, this will be a moving book.

When she finished, Stewart stood up, and said tearfully, "Don't. Make. Me. Like. You! That was marvelous. When is the other book coming out?", referring to the book she is writing about her years in the Bush administration.

John Grisham spoke about a book he is working on, a fictional followup to his first non-fiction book, An Innocent Man, about a man falsely convicted of murder and just hours from execution when he is found to be innocent. This next book, The Confession, is a novel about a man who committed a crime that someone else was sent to death row for. Grisham asks in this book, "Do you have the guts to watch someone executed for your crime?" I really liked The Innocent Man, so I have high hopes for this fictional account.
Posted by (Diane) bookchickdi at 10:58 AM