Reagan- What Was He Really Like? by Curtis Patrick

Reagan- What Was He Really Like? by Curtis Patrick 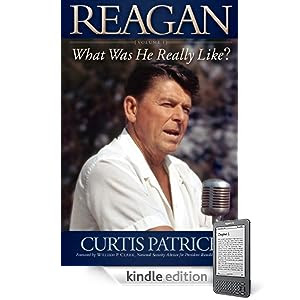 I'll state right off, I'm not a big Ronald Reagan fan, though I am surrounded by many who are. So when I had the opportunity to review a book titled Reagan- What Was he Really Like?, I thought maybe I should read it to get some insight.

Curtis Patrick, who worked with Reagan for many years, wrote the book, so he had access to many people who knew Reagan in all different aspects. I did like how the book was organized, with each person getting a chapter for their remembrance, and their relationship to Reagan listed in the chapter contents.

Much of the book focuses on Reagan's time as governor of California. I found that interesting, as most of the Reagan books deal with his presidency; this gives a good overview of a difficult time in the history of California. Reagan was governor during campus uprisings in the 1960s, and one person recalled Reagan meeting with student demonstrators when he was advised not to do it.

There are anecdotes from a pilot and his wife who flew Reagan around California, his scheduler, and his receptionist; many so-called 'everyday people' shared their impressions and meeting with him. They spoke of how polite he was, always asking about their families, and writing them notes.

They talked of his strong ability to focus, how he held strongly to his beliefs and showed little ego. One person remembered that when Reagan was angry, he would throw his glasses and say "damn it!"

The book has lots of photos, mementos and primary sources, such as newspapers articles; they add an interesting component to the book. There is a reprint of an interview from The Capitol Report with Reagan discussing his first 18 months as governor.

There are some drawbacks to the book. The author uses italics and exclamation points much too frequently in the book. When you emphasize so many things, it tends to take away the impact of the really important things. A good editor would have done wonders for the book.

This book is not for everyone; it is really aimed at the Reagan devotee, of which there are many. They will enjoy this look at Reagan's early political journey, from the everyday people who surrounded him. If you are looking for a balanced, critical look at Ronald Reagan, this is not for you.

Posted by (Diane) bookchickdi at 9:23 AM