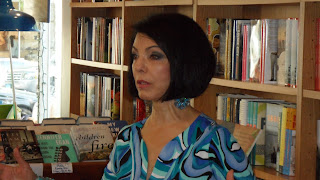 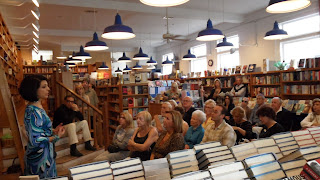 My husband and I made our first trip to the Hamptons this weekend. We had a lovely time, and enjoyed walking around the village. Of course, I searched out the local bookstore, and was delighted to see that Talia Carner, author of Jerusalem Maiden, was doing a signing on Saturday.

I met Talia at the Harper Collins blogger luncheon and had a wonderful conversation with her. I stopped by the beautiful BookHampton bookstore, which has such a fabulous, classy ambience with their wonderfully displayed books, and there was a standing-room only crowd there for Talia.

She spoke eloquently about her novel, set in Jerusalem during the end of the Ottoman Empire in 1911. Young Esther has to decide whether she should marry and have children to honor God as is expected of her, or to follow her dream and talent as an artist.

Creating art violates the second commandment, "Thou shall not create a graven image", so being an artist would put Esther in a struggle between her religion and her talent. Carner spoke of her grandmother and how her grandmother's ambitions as an artist were thwarted. She said she "was inspired by her grandmother's unlived life" to write this novel.

Carner did a great deal of research for her novel, visiting Jerusalem, and learning of the many hardships women suffered back then. There was a high infant mortality rate, and 50% of the women died in childbirth, mostly because they gave birth to so many children.

Since Esther made a trip to Paris in the novel, Carner had to follow her. Her vivid descriptions of walking through the city brought delight to the crowd.

Carner spoke with everyone and signed their books. I enjoy books about empowered women, and her words inspired me to put Jerusalem Maiden on my TBR list. I'll post a review soon.

Posted by (Diane) bookchickdi at 1:01 PM