What Alice Forgot by Liane Moriarty 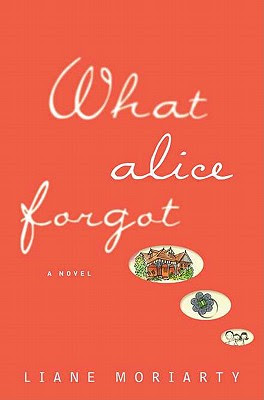 Alice thinks she is a happily married twenty-nine-year-old woman, pregnant with her first child. When she wakes up after fainting and falling off her bike during a spin class, she is shocked to slowly discover that she is thirty-nine, has three children and a pending divorce. (Reminiscent of another Alice who fell and woke up confused in Wonderland.)

"What Alice Forgot" has a premise that may seem trite, but in the hands of author Liane Moriarty, the story will keep the reader wondering "would the person I was ten years ago recognize the person I am today?". It's an interesting concept, and one that will create fascinating conversations in book clubs.

Alice thinks she and her husband Nick are still happy, awaiting the birth of their first child. She discovers that she and Nick can't even be in the same room with each other, even though Nick once promised her that they would never divorce.

She is also estranged from her sister Elizabeth, who is struggling with infertility issues. She doesn't even know her three children. Her mother is now dating her husband's stepfather.

Alice searches for clues as to what has happened to her life. Everyone describes her as "always busy", though she no longer works, she volunteers at her children's school. She is "super-mom", currently organizing the baking of the world's largest lemon meringue pie as a fundraiser. We all know that woman, but Alice does not recognize her.

She discovers that she is dating the school principal, a nice guy named Dominick. She wants her husband Nick back, but Nick is always angry with her. What possibly could have caused him to hate her so?

Gina was Alice's best friend, neighbor and constant companion. Her relationship with Gina pushed her away from her sister and husband. Alice doesn't remember Gina, whom Alice saw killed in a car accident. It was very traumatic, and made Alice even more bitter.

Alice doesn't recognize the person she has become. She is rigid, strict, judgmental, and vindictive. Nick has asked Alice repeatedly to give him back the family engagement ring that belonged to his grandmother. Even though she hates the ring, Alice refuses to give it back, just to be nasty. Alice does not know the woman she has become.

Elizabeth's fertility problems are depressing her, and possibly ruining her own marriage. Moriarty does a wonderful job making you feel empathetic with Elizabeth and her husband. I like this couple, and their struggle seemed very real and sad.

But the story all comes down to Alice. She is a complex character, and her journey to understand how she became such a different person, one she did not like, kept me turning the pages. This novel will make you think about how life's journeys can change a person, and cause you to reflect on your own journey.

The mystery is whether Alice will get her memory back and which man she will end up with- nice guy principal Dominick or workaholic husband Nick. There are a few turns and twists along the way, but the conclusion is satisfying.

This book is from Amy Einhorn Books, who have had such favorite best sellers as The Help,  The Postmistress and The Weird Sisters. When I see the Amy Einhorn books imprint, I know it will be a book I will enjoy.

Posted by (Diane) bookchickdi at 5:17 PM