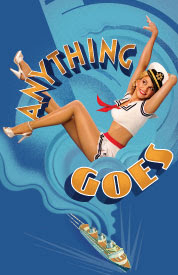 I finally went to see the Tony-winning revival of Anything Goes last week. Sutton Foster, who won the Tony for her performance is just amazing!

She is tremendous, as is the rest of the cast. John McMartin is hilarious, and Colin Donnell and Laura Osnes (who has left the show to play the lead in Bonnie & Clyde) are delightful as the star crossed lovers. And of course, it is always great to see Joel Grey on stage. His duet with Foster on Friendship is a delight.

The highlights of this show are the two show-stopping numbers: Anything Goes, which features some incredible tap-dancing from Foster and the company (and I can't believe how she could sing after all that dancing!) and Blow, Gabriel, Blow. The choreography by director/choreographer Kathleen Marshall, will make you cheer; I dare you not to tap your feet.

While the show is a bit corny at times, (it was written in the 1930s), the music by Cole Porter is lovely and the enthusiasm of the cast make it seem fresh. The costumes by Martin Pakledinaz are visually stunning too.

You will leave the show humming and dancing and in awe of the very talented Miss Sutton Foster, who in my book, is one of the best performers on Broadway. It was joyful experience!

Posted by (Diane) bookchickdi at 5:02 PM