The Last Weekend of Summer


We have been away for a few weeks in August, so for the last weekend of summer 2011, my husband wanted to have a whirlwind weekend of activities right here in NYC.

Friday night we met for dinner at Desmond's , a relatively new restaurant near Bloomingdales because I had voucher deal for $60 from Google. It was early, and we were the only ones in the restaurant. It was kind of odd. The food was decent, but my husband did say that they make the best Grey Goose and tonics he has had in the city.

Saturday he went on a group bike ride upstate; it was 70 miles roundtrip. I enjoyed my last day of the season at the rooftop pool reading Part Three of Gone With The Wind for  The Heroine's Bookshelf's readalong.

We had dinner at the member's dining room at the Metropolitan Museum of Art. It overlooks Central Park and has a lovely view. They had a special Farm to Table menu, which was delicious. It started with corn chowder, and I would have been happy if all four courses were the chowder. Yum.

The second course was a 'slightly warm' salmon, with a mango salsa topping that was seasoned perfectly. Braised short rib and a tasty monkfish on top of a creamy polenta followed by a fig crostata for dessert rounded out the meal. My husband also got the wine flight, which included Finger Lakes Riesling and Ommegang Abbey Ale from Cooperstown. He really enjoyed the Belgian ale.

Sunday we attended the Yankees/Blue Jays game. It was "a beautiful day for a ball game" as Michael Kay would say, but we sat in front of a man who insisted on describing play-by-play everything that was happening on the field to his 5-year-old-son. (Note to Dad- it might be better to just choose a few things to tell your son; there is no way he comprehended everything you were telling him. And you were not in a cone of silence- EVERYONE around you was annoyed.) 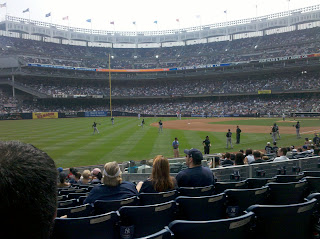 We got to see Derek Jeter (El Capitan) hit a three-run homer and Nick Swisher (Swisha-licious) hit one too. The right field fans love themselves some Swisher. It was good to see Jesus Montero, the hot Yankee prospect get two hits.

We ended the evening at Dizzy's Coca-Cola Jazz Club in the Time Warner Center, overlooking Central Park. Dion Parson and the 21st Century Band played a jazz/Caribbean set that was terrific. I especially liked "Lullaby for Belle"- so lovely.

Their prix-fixe dinner spécial was a Caribbean-influenced menu, with beef brisket sliders on sweet cornbread, a sea bass with a mango/cilantro salsa and a mango snowball of shaved ice making for a tasty meal.

Monday my husband rode his bike upstate with his nephew, and then we hit the American Natural History Museum because I got a great $5 deal on tickets. We saw the Tornado Alley movie, narrated by Bill Paxton (RIP Bill Henrickson). It was pretty interesting, but the rest of the museum was not really my cup of tea.

Many of the exhibits look like they haven't been updated in 30 years. I liked the Human Origins room and the Dinosaur exhibit is pretty cool. The giant blue whale is extraordinary too.

We ended our weekend at Isabella's restaurant near the museum. (And if you watch Larry David's "Curb Your Enthusiasm" on HBO, you'll recognize it as the restaurant he, Jeff and Suzie ate at outdoors this week). My husband had the steak frites, which he gave a thumbs-up to, and I had the fusilli pasta carbonara with peas and proscuitto, which was very good.

The best part of the meal though was dessert. If you ever get to Isabella's on the Upper West Side, you must order the Dark Chocolate Bag, filled with raspberry mousse, whipped cream, strawberries, and blueberries. Oh my goodness, it was incredible.

And that was our tourist's weekend in NYC!