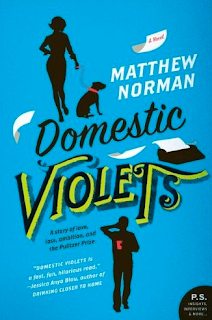 One of life's greatest pleasures is reading a debut novel and absolutely loving it. It's thrilling to discover a new talent and be able to proclaim to everyone you know- "You MUST read this book by this new author. It's fantastic!"

A lot of people have been talking about Matthew Norman's debut novel, Domestic Violets, and since they were people whose judgement I trust, I was hopeful. I opened the book and read the novel in two sittings. It lives up to the hype, a delightful surprise for me.

Tom Violet works for a soul-crushing corporation as a copywriter. He hates his job, except for the crush he has on a hot young copywriter that is veering toward the inappropriate.

He loves his wife, but is having problems in the bedroom department. She has been patient, but he fears that sooner or later, she may seek attention elsewhere. (It doesn't help that his young daughter has drawn a picture of Mommy, herself, her friend and her friend's Daddy, who is now Mommy's "friend").

His father, literary icon Curtis Violet, (who has sold millions of books and finally won the Pulitzer Prize) has come to stay with his son for awhile. Curtis is a great character, a Norman Mailer type figure. He drinks too much, and has cheated on every wife he has had.

The setting of the book is at the beginning of the financial crisis, and the company that Tom works for is in a constant state of laying off employees. Although Tom hates his job, he needs it. The funniest parts of the book take place in the office. Tom constantly needles Greg, the Director of Communications, who in response, files complaints about Tom with HR, including the following:


Dear HR: Tom Violet insists on smiling and saying hello to me every time he sees me, even in the men's room. However, I know that these sentiments are not sincere, and only succeed in undermining me in front of my team and fellow employees.

(Greg kind of sounds like Dwight Schrute from The Office.)

Tom has a manuscript for a novel, but he is too afraid to let anyone read it. He fears he cannot live up to his father's success. He hasn't even let his wife read it.

This sign of a good book is that I have so many pages noted for future reference; Domestic Violets has dozens of notes stuck in my book. It is uproariously funny and touching, with unforgettable characters and situations. Tom Violet has quickly become one of my favorite literary creations.

I really enjoyed the PS section at the end of the book. Norman talks about book signings, and he lists books that influenced him, including Justin Cronin's Mary and O'Neil, which I loved.

If you liked Jonathan Tropper's This Is Where I Leave You (and if you didn't, I'm not sure I want to know you), you will scream for Matthew Norman's Domestic Violets. It is one of the best books I have read this year; you MUST read it!

Posted by (Diane) bookchickdi at 2:59 PM