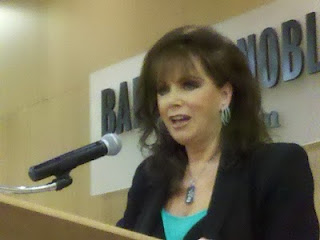 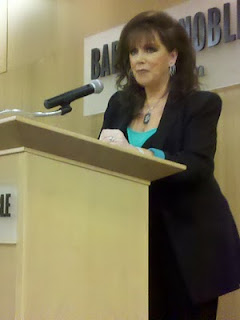 Jackie Collins writes the perfect beach read book, and fans of her Lucky Santangelo series will be so happy that her latest book, Goddess of Vengeance, is about Lucky once again.

Collins made a signing appearance at Barnes & Noble 86th St. store in NYC on September 13th. There was quite a diverse crowd there- young and old, gay and straight, men and women- Ms. Collins has some very faithful fans. And those fans know their Lucky; I overheard more than a few conversations with people referencing many characters and plotlines from previous Lucky books.

I was surprised to see that Ms. Collins didn't have an entourage with her; she has written over two dozen bestsellers, but all she had was an assistant and her editor. She lives in Hollywood, yet she was very down-to-earth (although her jewelry looked stunning and expensive). I liked how she related so easily to her fans.

When she announced that she was working on a YA (young adult) book about Lucky, the crowd roared their approval. She will have to leave out her trademark steamy sex scenes in the YA book, though.

Collins read from her new book, a married sex scene between Lucky and husband Lennie. (I have always said that if only husbands would give their wives Jackie Collins books, everyone would be happy.) She wanted to read the elevator scene, but said "it would be too much, it would get you too turned on!", to which everyone laughed. She also mentioned the elevator scene to Matt Lauer on the Today Show, so I'm going to have to look for that in the book.

After the reading, she turned to Q&A, asking "who will ask the first question, will it be provocative?" She answered questions about writing to soul music, she likes Usher and Drake, and likes to use Itunes to find new music.

She spoke about her writing process; she writes in longhand, and it takes her nine months to write a book. She says that she never knows what her characters are going to do, that they take her over. Her latest book features a despicable man, born of an American showgirl mother and Middle Eastern king. She read a New York Times story about a woman who was buried up to her neck and stoned for adultery, and that is where this is where the character came from.

She says that "every woman she meets wants to marry Bobby", Lucky's handsome son, and they all  "want to be Lucky", whom she sees as Angelina Jolie.

One woman asked when Ms. Collins' next book was coming out, because she likes to stretch out reading each book until the next one comes out so she always has a Jackie Collins book to read. Collins responded "I'm writing as fast as I can!"

The next book is titled Power Trip, about a Russian millionaire and his supermodel girlfriend. They invite five couples onto their yacht, and of course the characters are all familiar to pop culture fans. A couple like the Beckhams, a Latin gay pop singer (Ricky Martin), a sex-crazed politician (Anthony Weiner), a maverick journalist who travels the world (Anderson Cooper) and a 50-something male movie star who dates waitresses (George Clooney). Half the fun in reading Collins' books is figuring out who each character is based on.

She spoke about possibly bringing back some of her favorite characters from previous books, like Chris  Phoenix and Nick Angel, which set the crowd into peals of joy. She mentioned that in the first Lucky Santangelo  miniseries, Sandra Bullock played Lucky's doomed mother and Elisabeth Moss of TV's Mad Men, played Lucky as a young child.

Collins says that she gets lots of information for her books from drivers, stylists and hair and makeup people to the stars. She laughingly said that she lives next door to Al Pacino in Hollywood, "but he tells me nothing!"

I asked what authors she reads, and she responded "Mario Puzo- I loved The Godfather!" and even said that she sees Bobby becoming a little like Michael Corleone; something will turn him to violence because she "loves vengeance!" She also likes Robert B. Parker (author of the Spencer series) and finds Chelsea Handler very funny.

Collins is also working on a play called Hollywood Lies, and a cookbook based on Lucky. Each recipe will feature a short scene from Lucky's life with it. All the recipes will be "good, fun and easy".

When I got my book signed, I told Ms. Collins that I enjoy her on Twitter, and many of her tweeps were in the audience. She seems like the kind of woman you could go to lunch and gossip with, and I can't wait to read Goddess of Vengeance. I'll post a review when I finish. 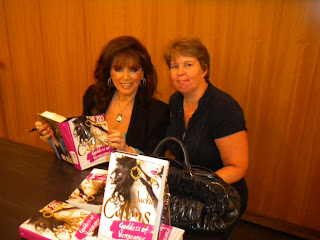 Posted by (Diane) bookchickdi at 1:07 PM