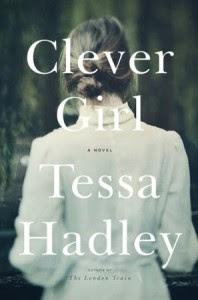 Most people lead ordinary lives, and their stories may not appear at first to be that fascinating to others. Stella is one of those people in Tessa Hadley's Clever Girl.  Stella lived with her single mother in a city in 1960s England. Her mother told her that her father had died when Stella was a baby, but Stella learned that he had actually left them.

She was close to her mother, as it was just the two of them. That is, until the day Stella's mother remarries, and Stella gets a stepfather and then a baby brother.  Stella does well in school, she is a clever girl, until she discovers boys and falls madly in love with Val. They spend all of their time together, but something is not quite right.

Stella makes one mistake that changes her entire life and future. Instead of graduating and going to university, Stella becomes pregnant, and Val heads off the United States to avoid trouble, not even knowing he will be a father.

Clever Girl realistically shows the difficulties of being an unwed mother, having a child so young. Stella and the baby move from her mother's home to stay with her aunt. I love this description of Stella at this time:


"I wasn't quite grateful enough; this was just a flaw in my character at that time in my life, I couldn't help seeing things bitterly, looking at everything-even kindness- with irony."

She has two young sons to support and no good job prospects. She moves back in with Fred, who adores her sons. Stella's life suffocates her, and she takes to running away; she drops the boys off at her mother's, and then she runs away, not knowing when she will return.

Stella finally gets to be a clever girl when she goes to university. Like many older students, she focused on working hard and succeeding.


"It was such a relief to be clever at last. For years I had to keep my cleverness cramped and concealed- not because it was dangerous or forbidden but because it had no useful function my daily life."

We get to see Stella from childhood to middle-age and though she may be an ordinary person,
Hadley tells her story in such a compelling way as to make her life interesting to the reader. It took me awhile to appreciate Stella, but by the end of the novel, I truly did.

Clever Girl reminded me of Colm Toibin's Brooklyn and Alice McDermott's Someone, both in style and substance. All three of these celebrate the life of an ordinary woman, leading a quiet, yet ultimately meaningful life.

My review of Alice Mc Dermott's Someone is here.
My review of Colm Toibin's Brooklyn is here.

Thanks to TLC Tours for putting me on this tour. The rest of Tessa Hadley's tour is here.