The Accident by Chris Pavone 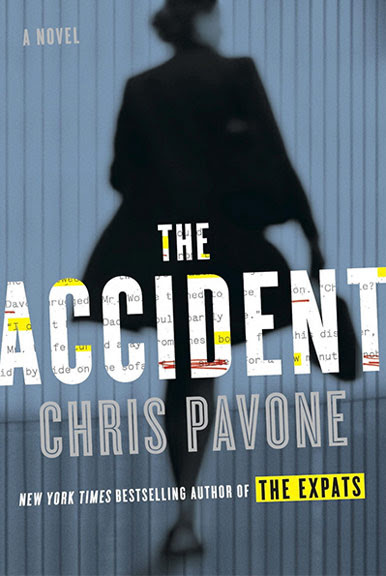 Chris Pavone won the Edgar Award for his first novel last year, The Expats, which I read and enjoyed. It featured Kate, a former CIA operative who moves to Europe with her husband and son and finds herself caught up in a dangerous situation that her nerdy husband created. It was a fast-paced read, with lots of twists and turns, a real page-turner.

His newest novel, The Accident, has as one of it's main characters, Hayden, a mysterious CIA operative (is there any other kind?) who worked with Kate in The Expats. (Kate makes a cameo appearance here, which is fun.)

Pavone worked in the publishing business, which plays a big role in The Accident. Isabel Reed, a literary agent, receives a mysterious manuscript at her office. It is a biography of media mogul Charlie Wolfe, one of the most powerful people on the planet, who just happens to be planning a Senate run.

The author is "Anonymous", and this person has some bombshell revelations about Mr. Wolfe, including the fact that he accidentally killed a college coed and, with his father, a deputy CIA director, and his best friend David, who was with him, got rid of the body. Oh, and he also helped the CIA destroy reputations and influence elections in other countries.

It would seem that the author is David, but David committed suicide by flying his plane into the sea after getting a terminal cancer diagnosis. But did he really die? They found the plane, but no body.

Hayden is tasked with finding the real author and retrieving every copy of the manuscript that exists. When people who have made copies of the manuscript end up dead, Isabel Reed must go on the run and try to outwit the killer.

Just like The Expats, The Accident is a real barn burner. You must be prepared to set aside enough time to read it in one sitting, because you will not be able to put it down. I find it interesting that Pavone writes such fascinating female characters, first Kate, and now Isabel, as the protagonists in his thrillers. They are the real stars of these action-packed novels.

If you are interested in the publishing world, Pavone gives you a real insider's look. I only hope that it is not as dangerous as it appears here. In his Acknowledgements, he lists many of the people who don't always get a thank you, including the sales and marketing team, and the copy editors and proofreaders at Crown Publishing, which was a nice touch.

Fans of John Grisham will enjoy Pavone's books, as they are heavy on plot twists, with a few jaw-dropping revelations that had me nearly dropping my book. I highly recommend both of Pavone's books, and was happy to see that in this book, I wasn't as confused by the ending as I was by The Expats.  I could see both of these books as films, and if they haven't been optioned yet, they should be.


Chris Pavone's website is here.
My review of The Expats is here.

Read an excerpt of The Accident here.

Thanks to TLC Tours for putting me on this tour. The rest of Chris Pavone's stops are here.