This post is part of Beth Fish Reads' Weekend Cooking.  If you have anything related to food, cookbook reviews, novel or non-fiction book reviews, recipes, movie reviews, etc., head over to Beth Fish Reads and add your post. Or, if you want to read food related posts, head over to read what some interesting people have to say about food.
Mostly True by Molly O'Neill
Published by Scribner ISBN 978-0-7432-3269-2
Paperback, $20.95, 288 pages 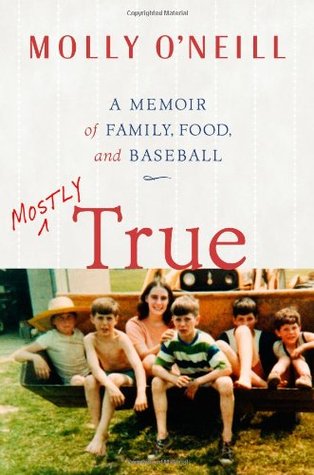 A few weeks ago I posted a review of Julia Pandl's Memoirs of the Sunday Brunch, and Sarah, a Goodreads friend, suggested I might like Molly O'Neill's Mostly True- A Memoir of Family, Food and Baseball. Since those are three of my favorite things, I searched and found the book and read it.

Sarah was right; what a fantastic memoir! Molly is the oldest O'Neill child, followed in succession by five boys in the 1950s and 1960s. They grew up in Columbus, Ohio, a close-knit crew, and much of their lives revolved around baseball (like mine growing up). Her dad loved baseball and encouraged his sons to play the game; youngest son Paul grew up to play for the legendary New York Yankees (and before that, the Cincinnati Reds, a team close enough to home for his parents to watch him play often).

Anyone from a big family will relate to Molly's memories of growing up in a big family. Molly's attitude towards food came from her parents, who had a different idea than many people at that time. Columbus was (and still is) the test-market capital for food products. Grocery stores were filled with product samplers, while ubiquitous today, were not found in may places in the Unites States  back then.

The O'Neill's, however, did not serve their children pot pies or macaroni and cheese or tuna noodle casserole or even meat loaf. Her parents "practiced a separation of food groups. We had meat. We had potato. We had vegetable. We had salad. We had dessert.. Each was distinct and none was overcooked. It was humiliating."

Molly first became interested in cooking when she was trying to lose weight. She joined a weight loss support group because her brother mercilessly teased her about having unidentifiable kneecaps. There, a woman gave her a cookbook and Molly started cooking for herself because her mother would not make a separate meal for her. Soon Molly ditched the low calorie cooking and moved on to making recipes out of Julia Child for her grateful family.

She went to college in Massachusetts, became a feminist, wrote poetry and helped to start a feminist, humanist, vegetarian restaurant. As the women who ran the restaurant began to become more and more militant about what could be served, Molly became more creative with ways to make broth without any trace of beef and ways to use tofu.

After college, she settled in Provincetown, working at many restaurants. I loved reading about how Molly got her hands-on education, how she fought for her place in the male-dominated kitchens. Surely growing up with male siblings helped her here.

Molly gained a reputation, and a following, and soon two of her brothers followed her into the business. She got them jobs and they all cooked together.

Eventually Molly went to Paris to learn how to make desserts, she became friends with her neighbor Julia Child, she moved to New York and ended up a New York Times restaurant critic and a famous cookbook author.

Paul was playing for the Yankees while Molly was living in New York, so she spent many games sitting in the stands watching him and her father, who was so thrilled to have a son playing Major League baseball. Molly's mom was thrilled to be able to shop in New York.

This is a book for anyone who is fascinated by food, family and yes, baseball. But it is much more. It is the story of a woman finding her way through her passion and I absolutely loved it. I know I will read this one again and again. Thanks to Sarah for the suggestion!

You can find some of Molly recipes on Cookstr here.
My review of Julia Pandl's Memoir of the Sunday Brunch is here.

Posted by (Diane) bookchickdi at 9:54 AM