This week we celebrated my mother-in-law's birthday. My husband's parents came to the city and we saw a matinee performance of After Midnight, a celebration of the Cotton Club that had such fabulous singers, dancers and the amazing The Jazz at Lincoln Center All-Stars playing all the music. We were lucky enough to see singer k.d. lang as the featured performer- she has the purest, loveliest voice and she performed with such pure joy. And Dule` Hill (The West Wing, Psych) is terrific as the sort of narrator/host of the show.

I highly recommend After Midnight to anyone who loves music and dance. It's a fantastic show, and you will feel nothing but happiness as you leave the theater humming and tapping your feet.


We went to dinner at the Carlyle Hotel, a New York institution. We had a Travelzoo deal- dinner for two (two glasses of champagne, two appetizers, two entrees and two desserts) for $125. Some restaurants have a very limited menu for these special deals, but the Carlyle had a large and varied menu for us.

Since it was Ash Wednesday (and we are Catholic), we all chose one of the many fish dishes on the menu. The crab cake appetizer was served with a large, crunchy fried onion ring, and it was delicious. It was light and tasty, but we all wished for more of the sauce that was under the crab cake.

For our entree, we had the Lobster Thermidor. I love the way they serve it; they cook the lobster and save the shell. They fill the shell with mushrooms and then layer the lobster and top that with the cream, cheese and brandy sauce. It is a classic dish and we all adored it. 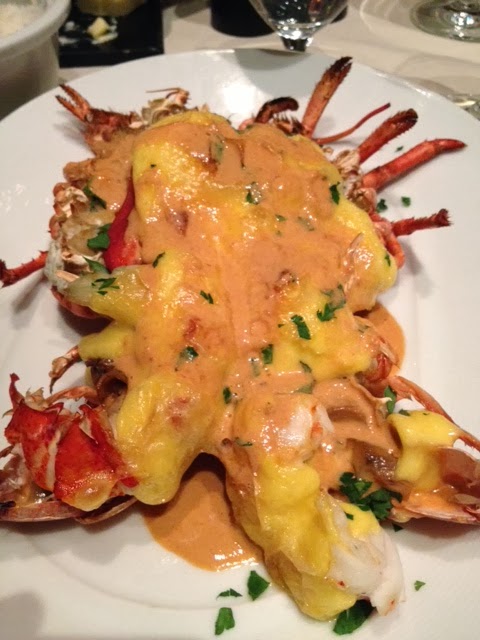 For dessert, I ordered the Creme` Brulee because I haven't had in a very long time, and it seemed like the perfect old school New York thing to get. It did not disappoint.
The ambiance was very Upper East Side New York. As you walk in, there are two photos on the walls- one of Jacqueline Kennedy and the other of her husband John Kennedy, both in front of the Carlyle. You can picture sitting them at one of the tables, set with such lovely china, surrounded by huge floral displays.

It was a fabulous place for a birthday celebration and on the way out we saw Shirley Jones sitting backstage getting ready to go on at the Cafe Carlyle. How I wanted to run up and give her a hug and tell her how much I have enjoyed her music and acting in movies (and she's Mrs. Partridge!), but I restrained myself.