By The Wayside Stories by Anne Leigh Parrish 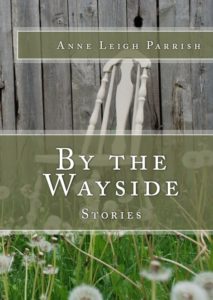 I loved the book, and it reminded me of Elizabeth Strout's Pulitzer Prize-winning linked story collection, Olive Kitteridge, but I enjoyed Parrish's book even more.

Parrish is back with a more traditional collection of stories, By the Wayside. Instead of linked stories with the same characters appearing in the stories, these stories have similiar themes. Many of the stories have appeared in other publications as well.

The eighteen stories in By The Wayside deal mainly with young women facing a crossroads in life. These sassy women are dealing with dead parents, mental illness, sibling animosity, disappointment, marriage, and unrequited love. Many of these women are lonely, and some have adult responsibility beyond their young years.

In the first story, An Angel Within, Leet is a twenty year-old woman whose parents are gone. She is responsible for her two younger sisters, a sixteen year-old obsessed with nail polish, and a thirteen year-old whose obsession with beautiful clothes and handbags sometimes led to shoplifting.

Leet believes that an angel lives inside her; it is the only way she can get through her days at her lousy job as a grocery bagger in a town that requires a two-bus communte, only to return home to deal with her sisters.

The second story, How She Was Found, is one of the strongest. Fiona is on an archeological dig with her male professor and three male fellow students who treat her with disdain until she makes a significant find. I particularly liked Fiona's spunk. (Lou Grant would not like it- Mary Tyler Moore Show shout-out.)

Short stories require that the author get right to the point with her words, there is no room for flowerly descriptions. Parrish excels in that, using indelible phrases and sentences that set the mood and character in the reader's mind, like these:

In the terrific Where Love Lies, she writes "Dana figured nothing had been her fault. Bruce figured everything had been his fault." You learn a lot about that married couple in one sentence.

When Anna and her newlywed husband Paul move to the dusty town of Huron, South Dakota in 1920 in An Act of Concealment, Paul "thought the place he looked at nothing like home. His heart sank a bit. Anne's didn't. To her, home was an idea, not a place." I absolutely loved that passage, and again we know who these people are immediately.

When Anna says to another man that she believes marriage causes a kind of blindness, he tells her that "marriage alters one's vision... I mean that he doesn't see you well enough and (that) you see him too clearly."

Another story I loved was The Lillian Girl, about a teen who runs away from her disinterested parents and finds a woman looking for her daughter. It's the last story, and a fitting end to the this wonderful collection.

I found that I enjoyed the stories that were longer, the stories that were but a few pages seemed to end too abruptly for me. I recommend By the Wayside for those looking for a good short story collection, written beautifully. It's a perfect one-day read, but one that you'll contemplate much longer.

My review of Our Love Could Light The World is here.

Thanks to TLC Tours for putting me on Anne Leigh Parrish's tour. The rest of the tour stops are here: