Every Wild Heart by Meg Donohue 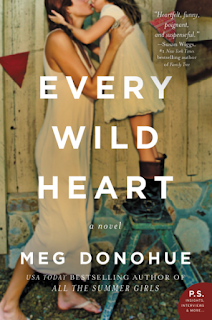 When we used to vacation in Cape Cod, after the kids were put to bed, my husband and I would listen to Delilah After Dark on the radio. People would call into Delilah, tell her a story about a lost love, a current love, anything to do with love, and request a song. It was very soothing to listen to Delilah's voice and drift off to sleep.

Meg Donhue's protagonist in Every Wild Heart, Gail Gideon known as G.G. to her many listeners, hosts a nightly radio talk show (Donohue says that Delilah was an inspiration). G.G. gained national prominence when a YouTube video of her on-air rant the day that her husband asked for a divorce went viral.

G.G. used to play music, but once people heard her rant, she became one of the most popular talk radio hosts in the country. Each night people call in to her show and she doles out advice, basically telling them if she could get over her divorce, they can make it too.

G.G. has a 14-year-old daughter, Nicole, whom she loves more than life itself. She is on good terms with her ex-husband Tyler, now happily remarried with two boys, although she still has feelings for him.

Nicole has a stutter, and that makes her reticient to speak in class. Everyday after school she goes to the stable where her horse is kept. She rides, helps clean out the stables, and is well-liked by Denny, the stable owner.

Nicole has one good friend, and no boyfriends. She is a good kid, with a strong sense of fairness. She can't abide the bullying that goes on at her private school, and wishes she could do something about it.

One day Nicole takes a terrible fall from her horse, and is knocked unconscious. After the fall, her personality changes. She becomes more daring, willing to take risks she never would have thought of trying before. This worries G.G. a great deal.

Also worrying G.G. is the fact that it appears she has a stalker, one who wishes to do her harm. G.G. goes into Mama Bear mode to protect Nicole from the stalker and her own reckless behavior.

Donohue has a way with a phrase, like these:


"I would have taken the opportunity to remind him that he adored the beast in me right up until the moment he decided he didn't."

"The strange thing about crazy people, I'd noticed in the years since my rant about Tyler had gone viral and I'd become a household name, was that they all shared a similar vocabulary, as though love could be found in a million variations, but hate was just hate, any way you slice it."


Every Wild Heart has packed a lot inside- the depth of parental love, teenagers who want freedom to make decisions but don't yet fully understand the consequences of those decisions, chasing your dreams, women trusting themselves, and opening yourself up to love.

The characters are fully drawn, and I particularly liked that the ex-husband isn't 'the bad guy', he loves his daughter and cares about his ex-wife. The story is told in the alternating voices of G.G. and Nicole, making this a great book for mothers and teenager daughters to read together.

If you are a fan of Delilah After Dark, like to ride horses, or enjoy rock'n'roll music (there's a playlist at the end of the book), you'll get an extra level of enjoyment out of Every Wild Heart.

Meg Donohue's website is here.
Thanks to TLC Tours for putting me on Meg Donohue's tour. the rest of her stops are here: