To The Stars Through Difficulties by Romalyn Tilghman 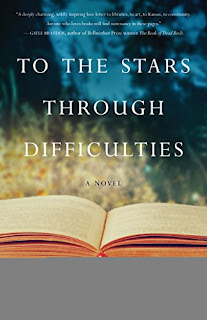 I volunteer at the Book Cellar, a used bookstore located in the basement of the Webster Library on the Upper East Side in Manhattan. The Webster Library is one of the original Carnegie libraries, built in 1905.

Andrew Carnegie gave money to build nearly 1700 libraries across the country, many in small towns like the town of New Hope, Kansas, the setting for Romalyn Tilghman's novel To The Stars Through Difficulties.

The novel opens with a newspaper clipping of a an EF-5 tornado that destroyed the entire town of nearby Prairie Hill, where the only thing left standing was one wall of the old Carnegie Library. The story is told through the eyes of three women- Gayle, a woman who lost her home in the tornado, Angelina, who is writing her PhD thesis on Carnegie libraries, and Traci, an artist from New York who relocates to New Hope for the promise of a job teaching at an art center, formerly a Carnegie library in New Hope. (I did not realize that many small town libraries were turned into media/arts centers in the 1970s.)

Angelina's grandmother lived in New Hope and she played a major role in procuring money from Andrew Carnegie to build a library there. Some of the most interesting sections of the book tell the story of how the women in the town banded together to raise the necessary funds to get the grant.

Those women would let nothing stand in their way in their determination to get a library for their town, not their husbands, and in Angelina's grandmother's case, not the expectations of what a woman is capable of doing or the opinions of others as to how to accomplish that.

Angelina needs this trip to complete her thesis. The family print shop she ran with her late father is about to close, her mother is not supportive of her goal, and it has taken her too long to get this far academically.

Traci is a fish out of water in New Hope. She is a young woman from a big city, and she has nothing to lose. Her new job is tenuous, and depends on the town to raise funds for her salary. She finds it hard to relate to the women in this town, and the troubled teens she is charged with teaching challenge her in many ways.

To The Stars Through Difficulties is the motto of the state of Kansas, and it is the perfect title for this wonderful book. It is about women banding together to create something lasting, something that will better their communtity and the people who live there. It is a story about women empowering themselves.

We see how much Angelina's grandmother's generation and the women of today have in common. They set a goal and come hell or high water, it was going to be achieved. I enjoyed seeing how supportive the women were of each other, even while being wary of each other at times.

I highly recommend To The Stars Through Difficulties.