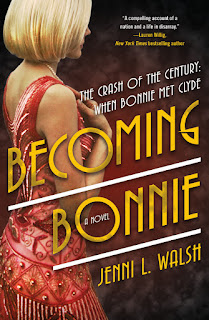 I enjoy reading novels about real people. I find it intriguing when authors take a real person and using research and their imagination, write a fascinating story.

Jenni L. Walsh's Becoming Bonnie, takes the reader on the journey of Bonnelyn Parker, a young woman living in Texas just before the Great Depression, before she meets Clyde Barrow and becomes one of the most infamous criminals in America- Bonnie of Bonnie & Clyde.

Most people know Bonnie Parker from the 1967 classic movie, Bonnie & Clyde, where Faye Dunaway played Bonnie Parker as a bored waitress who falls in love with Warren Beatty's charming Clyde Barrow, and they roam the southwest robbing banks before they end up dead in a violent clash with police.

Becoming Bonnie begins with a teenage Bonnie, a good, religious girl from the wrong side of the tracks in Dallas. Bonnie is a good student, and dreams of becoming a teacher. She sings in the church choir, and is a dutiful daughter and kind to her brother and much younger sister.

Bonnie's dad is dead, so she helps her working mother by working after school as a waitress in a diner. She is engaged to Roy, a young man who buys a run-down home for them to refurbish and move into once they are married.

When the depression hits, it hits Bonnie's family hard. Her brother mangles his hand at the factory where he works, so he becomes a stockbroker just before the crash. Her mother becomes ill and can't work as much. When Bonnie's boss has to let her go because there is no business, she becomes desperate to find a job to help her family.

Her best friend Blanche convinces Bonnie to join her at a speakeasy, where they both find jobs. Blanche meets Buck Barrow and it's lust at first sight. Buck introduces Bonnie to his brother Clyde, and when Bonnie saves Clyde's life after a booze running escapade goes awry, Clyde is grateful- and falling in love.

Walsh shows us how circumstances moved Bonnie from a shy, devout young woman to a person seduced by a lifestyle and the love of a man who swept her off her feet. She does a wonderful job putting the reader in Bonnie's shoes, and we get a real sense of how the Great Depression left people desperate.

The novel really comes alive when Bonnie and Clyde's relationship starts to blossom, you can feel the heat on the page. It reminded me of the Wizard of Oz movie going from black and white to color.

Becoming Bonnie ends before the pair begin their crime spree, and I hope that Walsh will revisit the story and tell us what happened after they became Bonnie and Clyde.

Posted by (Diane) bookchickdi at 3:36 PM