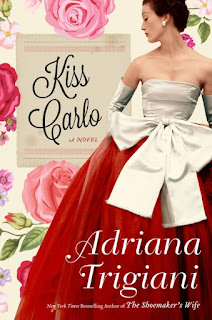 As regular readers of this blog know, I always look forward to a new Adriana Trigiani book. I feel like I am an honorary Italian when I read her books, filled with family, food, romance and people with a good work ethic.

Trigiani's latest novel, Kiss Carlo, is a big, beautiful novel, stuffed with all of the above and more.  The story begins in Roseto Valfatore, Italy in 1949, with Carlo, the ambassador, heading to Roseto, Pennsylvania to seek help from some Italian-Americans in rebuilding their road.

From there, we meet the Palazzini brothers of Philadelphia, Dom and Mike, who once owned a taxi company together, but after a falling out, they now have competing taxi companies and no longer speak to each other.

Dom is the frugal one, and his wife Jo has spent her life caring for their home and (now grown) children, and her nephew Nicky who lost his parents at an early age. Jo is the kind of woman who makes homemade pasta in the basement, and irons everyone's underwear.

Mike is the flashier guy, and he has a more successful taxi business. His wife Nancy has the fancy clothes, and visits the hair salon weekly. The sisters-in-law used to be close, but because of the feud no longer speak. It's almost Shakespearean, you could say.

Speaking of Shakespeare, Nicky drives Uncle Dom's taxi by day and by night volunteers at a local Shakespearean theater, run by Calla Borelli, who is trying to keep the doors to her father's theater open. This new television craze has hurt live theater.

What's interesting in Kiss Carlo is that the main character is Nicky, a man. Nicky feels a little lost, even though his aunt and uncle love him very much. He is engaged to Peachy, a woman who feels her time is running out before she is officially a spinster.

When Nicky gets the opportunity to perform onstage at the theater, he comes alive. Now he knows what he wants to do- be an actor. Peachy, however, will not hear of it.

There is a lot going on in Kiss Carlo, and watching how Trigiani weaves the story and characters together is just amazing. It's like seeing someone take a skein of yarn and a few minutes later a beautiful blanket materializes.

There are so many great characters in this story- Jo Palazzini, Calla, Nicky, Mamie Confalone- but my favorite is Hortense. Hortense is a black woman who works as a dispatcher for Dom's taxi service. She has been with them for years, and she brooks no nonsense. Don't ask Hortense what she thinks unless you really want to know.

Hortense finds herself involved in a crazy caper with Nicky, and through that experience she meets a woman who will change her life. I love that Hortense wants a better life for herself and when she sees an opportunity, she works hard and uses her brains to make it happen. (It's that work ethic that shows up in every one of Trigiani's books.)

I had the chance to speak briefly with Adriana and I told her that I think Hortense is my all-time favorite character of hers. She told me that Hortense was a real person, and she actually shows up in the Acknowledgements page.

Soap opera fans will get a kick out of the fact that uber-producer Gloria Monty has a cameo appearance in this book. I told you, there is a lot packed into this book.

I gave a copy of Kiss Carlo to one of my Italian-American friends, and she read the 500+ page book in two days, telling me she couldn't put it down. I totally agree with her, this is one of Adriana Trigiani's best books.

Whether you're from a big family or just yearn to be, Kiss Carlo is for you. And if you take this book to the beach, bring along plenty of sunscreen because you will not be able to stop reading it until you finish. I give it my highest recommendation.

Thanks to TLC Tours for putting me on Adriana Trigiani's tour. The rest of her stops are here: