Dunkirk- The History Behind The Major Motion Picture by Joshua Levine 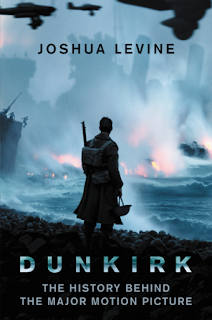 Christopher Nolan, the creative genius behind The Dark Knight (Batman), Inception and Memento turns his eye next to Dunkirk, which tells the true story of a major British military evacuation off the coast of Belgium during WWII.

Dunkirk is based on a book of the same name by historian Joshua Levine. Levine's 2011 book has been updated for the upcoming movie release, and it is bookended with an interview between Levine and Nolan at the beginning of the book about why Nolan chose this project, and a chapter at the end of the book discussing the process of making the movie, including comments from members of the production team. Movie buffs will love these extra chapters, giving them a fascinating insight into the process of moviemaking.

History buffs will love the actual story of Operation Dynamo itself. I confess to not being a big military history reader, so the sections of the book I found most intriguing had to do with the historical perspective of the events that led up to Britain's involvement in WWII.

Great Britain was still reeling from the effects of WWI, fought nearly twenty years prior. They lost an entire generation of men in WWI, and the thought of losing another generation to a war with Germany was not one that many people wanted to contemplate.

The worldwide depression severely impacted Great Britain, with unemployment high. With no system of welfare, there was tension between the classes, and extreme political parties were able to gain a foothold exploiting this. One can see echoes of this in today's world events as well.

Prime Minister Neville Chamberlain believed that he could work with Hitler's Nazi government to avoid war. He was accused of appeasement, and this led to the election of Winston Churchill as Prime Minister of Great Britain during the most trying time in history.

Churchill approved the plans for Operation Dynamo, which called for the evacuation of as many as 40,000 British troops from Dunkirk. The Germans were about to surround the British and French troops, and in order to save the troops from a certain slaughter or capture, they must arrange for an evacuation. Failure to save these troops would mean that the Allies would most likely lose the war, and the world today would be a much different place if that had happened.

The book goes into great detail about the actual logistics of the evacuation, a monumental task. Every available military and private ship and boat was recruited to make the trip to Dunkirk to ferry the soldiers back to England. There are many remembrances from people who make that voyage, and they are so interesting.

The troops were sent to the beach, and with tens of thousands of soldiers along the beach, some for many days, it became a little city of its own. Men played cards, built small shelters, and waited and waited until it was their turn to wade out in to the sea to be rescued, all while being attacked from the sky by German airplanes.

Levine compared this scene to the one of refugees from war and poverty who are taking any form of floating apparatus to get to the shores of Greece and Italy, an apt comparison.

Dunkirk is a fascinating look at a historical event that many people don't know about. While some people felt that this event was a story of a failed battle, Levine looks at it as an incredible story of survival. The goal was to save 40,000 troops, and the reality was that over 260,000 troops were rescued from the shores of Dunkirk, an astonishing number.

England used Dunkirk as a rallying cry and people in England today still speak of the "Dunkirk Spirit" when talking about bucking up and working together to achieve a goal that seems unattainable.

Thanks to TLC Tours for putting me on Joshua Levine's tour. The rest of his stops are here: