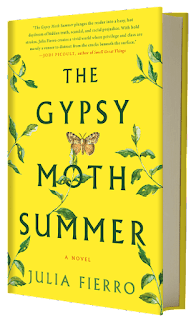 Author Julia Fierro garnered critical praise for her debut novel, Cutting Teeth, about a group of preschool parents and a weekend they spend together on Long Island. (My review is here.)

She managed to corral a large group of characters and make them believeable and interesting. In her new novel, The Gypsy Moth Summer, we once again get a multi-character saga, this time set in 1992 Avalon Island, a stand-in for Long Island.

Leslie has been estranged from her wealthy parents since she married Jules, an African-American man. Leslie and Jules have two children- handsome, sensitive teenage Brooks and toddler Eva. When Leslie inherits her parents' large estate in Avalon, she moves her children and a reluctant Jules back to her now-crumbling family home.

Jules is less than excited, but he is a landscape architect and the beautiful gardens on his in-laws' estate seduces him. What he could do with those gardens! But he fears Leslie is hiding something from him too.

Jules is also concerned about his son Brooks. There aren't many black families on Avalon, and when Brooks becomes involved with Maddie, a 16 year-old with an alcoholic mother, and a father who berates (and beats) her and her brother Dominic, Jules' antenna is raised.

Maddie's grandfather is the Colonel, a man who holds an important position at Grudder Aviation, a company that made its upper echelon millionaires off the many years of government contracts they procured.

The effects of aging are taking its toll on the Colonel, and his wife Veronica can't hide his condition forever. Veronica doesn't trust Leslie, believing that she has come home to cause trouble for Grudder, so she intends to use Maddie's relationship with Leslie's son to uncover Leslie's plans.

Once again, Fierro writes multi-faceted characters, and each person's point of view is distinct. We understand why they do the things they do. Fierro creates such empathy for each of her characters, even the ones you may not particularly like.

You'll be transported back to your own teenage summer romances as Fierro gets those feelings and the 1992 atmosphere pitch-perfect. (The 1992 presidential race, the clothes and the food will bring back memories.)

Fierro has many balls in the air here, and she juggles them all with admirable skill. The Gypsy Moth Summer deals with family issues, class distinctions, race issues, summer romance, the military complex, corporate pollution and yes, a gypsy moth invasion that overshadows everything happening in the summer of 1992. I highly recommend The Gypsy Moth Summer, it will be one of the most-talked about books of the summer.

Thanks to TLC Tours for putting me on Julia Fierro's tour. The rest of her stops are here: