This week's Friday Five begins with a quick road trip.

1) We spent a day in Washington DC, where my husband had business and I visited the Smithsonian National Portrait Gallery. They have such interesting exhibits, like Votes for Women: A Portrait of Persistence and One Year 1968: An American Odyssey. I really went to see the Barack and Michelle Obama portraits, which are marvelous. Barack's looks almost 3D like, and Michelle's is magnificent. It was great to see so many school groups there looking at them. While there, I heard the best thing I've ever heard in DC. A young boy, maybe 8 or 9, was talking to his older sister and while standing in front of the huge portrait of Bill Clinton, he pointed at it and said to her, "Look, it's Hillary Clinton's husband!" He couldn't understand while he was there and not Hillary. 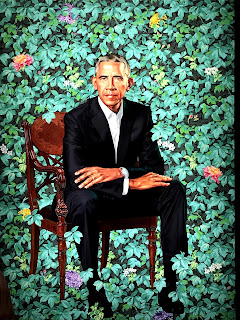 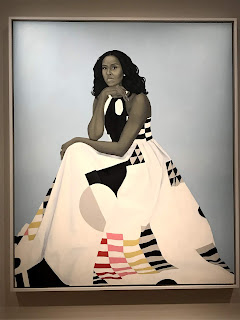 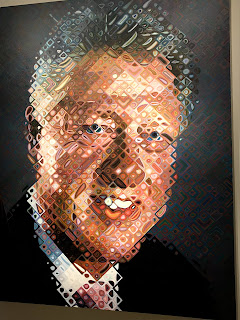 2) I've always wanted to eat at Jaleo, chef Jose Andres' DC restaurant, and since it was down the block from the National Portrait Gallery, I finally got the chance. I had a JLT- jamon (Spanish ham), lettuce and tomato on grilled brioche bread with a tasty mayonnaise sauce. The best homemade chips I've ever had came on the side and I added a red sangria for a delicious lunch.

3) Tuesday night I attended a book talk and signing of Jacqueline Winspear's 15th book in her Maisie Dobbs series, The American Agent, at Barnes & Noble on the Upper East Side. I've read all of her books, and this is one of her best in the series. It's set during the London Blitz during WWII, and Maisie and company are back together again. Winspear's talk was very interesting, she spoke about how the character of Maisie came to her at a stoplight during a rainstorm in California, fully formed.

4) The season three finale of This Is Us was on this week, and it was everything you would want it to be. I have been a fan since day one, and seeing into the future of the Pearson family was so heartbreaking and emotional, I can't wait for season four. Everyone associated with this wonderful show is top notch- writers, producers, directors and actors. If you don't watch it, I highly recommend it.

5) Speaking of things that make you emotional, I finished reading Lisa See's newest novel, The Island of Sea Women, about two female divers who lived on Jeju Island, off the coast of Korea. I knew very little about the history of Korea prior to the Korean War, and this takes place between the Japanese occupation of Korea, through the Korean War, and ends up in 2008. It's a stunning novel, and as I read the saddest, most horrifying part, I had to stop myself from sobbing on the train. It's one of the best books of 2019. 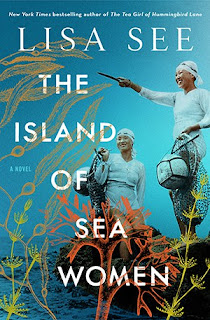