The Better Sister by Alafair Burke 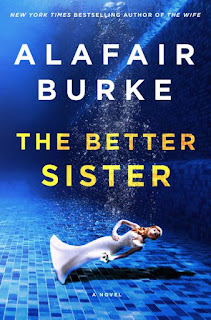 The Better Sister is the third book from Alafair Burke that is related thematically, although the characters are different in each book. The Ex deals with a lawyer called upon to defend her ex-boyfriend from a murder charge. The Wife features a woman whose high-profile professor/author husband is accused of preying sexually on young women. And in her latest, The Better Sister, a high-powered magazine editor finds her husband murdered in their  East Hampton vacation home.

Chloe worked her way up in publishing to become the editor-in-chief of the last successful feminist magazine standing. She married Adam, a former prosecutor for the Southern District of New York, now a lawyer in a white shoe firm. Adam was previously married to Chloe's older sister Nicky, who was always the wild-child bad sister to Chloe's rules-following, hard-working good sister.

One day Adam found Nicky floating facedown in their pool, with their toddler Ethan next to her. She had been drunk or on drugs (not unusual), and Adam divorced her and took Ethan to live in New York, where Chloe began to spend all her free time with them.

Adam and Chloe married, and Chloe became Ethan's defacto mom. Nicky was out of the picture, staying back home in Cleveland to care for their parents.

When Chloe finds Adam stabbed to death in their East Hampton home, she knows that the police will look hard at the spouse, they always do. She also has to contend with the fact that she is not legally Ethan's mother and has to contact Nicky, who soon shows up.

Chloe and Nicky revert back to their sibling relationship- Chloe is the responsible one, Nicky is the screw-up. But when the police turn their attention to Ethan as a probable suspect, Chloe and Nicky must make amends and decide to work together to prove Ethan innocent.

The Better Sister is a twisty, timely suspense story. Chloe is a women who is a prominent media person, and with that comes the trolls who send her hateful, even threatening, messages on social media. Chloe believes that perhaps one of them could be the killer.

Burke throws in a lot of red herrings, and she excels in letting the reader believe they may have solved the mystery, only to be surprised at the big reveal. Being a former prosecutor, she brings a sense of reality and tension to the courtroom scenes.

As the mother of two young men, I really felt such empathy for Chloe as a mother, trying to protect her son. I had a pit in my stomach during many scenes.

One thing you learn from The Better Sister is that secrets can destroy people, and I can only think that if they communicated better, some of their big problems could be avoided.

I read The Better Sister in one sitting, furiously turning the pages to find out who dunnit and why. I highly recommend it for anyone who likes a great suspense story.