The American Agent by Jacqueline Winspear 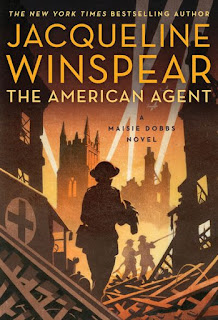 When an American female radio war correspondent is murdered shortly after Maisie and Priscilla meet her, Maisie is asked to team up with an American Department of Justice official, Mark Scott, whom she met when she was in Spain during their Civil War.

Unlike some of the more recent Maisie Dobbs books, the action takes place all in England, and most of Maisie's friends, colleagues and family are all here- Billy and Sandra, who work for her at her private investigations agency, police investigator MacFarlane, Priscilla and her family, and Maisie's father and stepmother, along with the young orphan girl Maisie is trying to adopt.

The stakes in The American Agent are so much higher as everyone in London is endangered by the nightly German bombings. In addition to Maisie trying to find out who killed Catherine Saxon, she and her friends must worry about being killed themselves.

Real people, like a young Edward R. Murrow, make cameo appearances, and Catherine's family has a resemblance to US Ambassador to England Joseph P. Kennedy's family here. (Catherine reminded me of Kick Kennedy, who tragically died in a plane crash during WWII.) Winspear's research and attention to detail are so appreciated here.

If you are a Maisie Dobbs fan, you will enjoy this latest entry into the series. If you are not a Maisie Dobbs fan, I recommend you get on the bandwagon and start with book one, Maisie Dobbs. It's a wonderful series for high school women to read, as Maisie is a strong, smart and caring female role model. She makes mistakes, but she learns and grows from them, something we can all aspire to.

Posted by (Diane) bookchickdi at 1:06 PM